Moral Priorities of the Rich and Famous

These days most people have twigged to the fact that The Babylon Bee is a parody site, but that hasn't slowed them down. 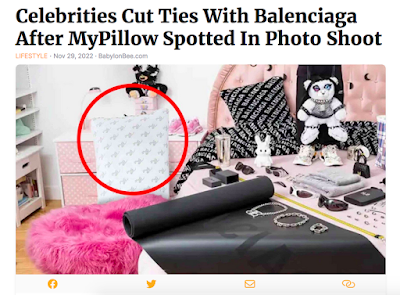 Balenciaga had just survived a small scandal involving another controversial ad campaign that featured children alongside bondage materials, but the MyPillow scandal is threatening to sink the fashion company once and for all.

"Child abuse is one thing," said progressive activist Asher Carroll. "But being open to conservative viewpoints and buying a pillow from someone who supports the January 6 rioters, that is truly unforgivable."

Gotta love The Babylon Bee.
Posted by Melinda at 11:26 AM
Labels: Crime, Famous Idiots, In the News, Jerks, LOL, Media