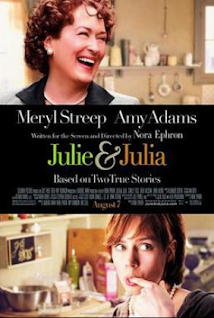 It was announced today that author and food blogger Julie Powell died October 26 at the age of 49.  Her cause of death was given as cardiac arrest.
Powell became famous in the early 2000's when she blogged her experience cooking all 500+ recipes in Julia Child's classic Mastering the Art of French Cooking. That blog led to a book deal and that led to the 2009 film Julie & Julia, which combined Powell's book with Child's autobiography My Life in France and is one of my all-time favorite movies.
Although the news was unexpected, apparently she had been ill, including having had COVID recently. These are recent posts from her Twitter account:

I went all the way back to April and she was having all sorts of weird issues.

Powell's second book, Cleaved, was not a success and she hasn't published another book since. I don't know what's been going on with her in the past few years, but she complains about being depressed and broke in a lot of her tweets.
I do wonder what brought on the cardiac arrest. I assume there will be an autopsy to find out what caused it. She seems to have had undiagnosed issues going back a while, but it's just not normal for a person her age to die suddenly like this.
Posted by Melinda at 5:12 PM
Labels: Blogging, Books, Cooking, Film, Foodie Stuff, In the News, Writers