"Entertainment to Die For" is coming! 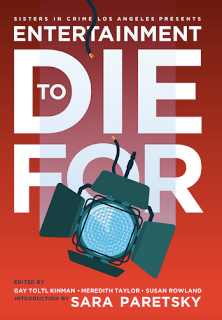 A couple days ago the authors were informed that Entertainment to Die For, the upcoming anthology from Sisters in Crime/Los Angeles (that includes my story "As Seen on Television"), is being released on January 1. It was unexpected since it was right smack in the middle of the holiday season, plus SinC/LA usually doesn't release their anthologies until Spring, but whatever the reason, we're ringing in the New Year with a release.
You can pre-order the Kindle edition now here, and I'm told hard copies will be available on January 1. Here's the description of the anthology from SinC/LA:

Are a famous director and an illustrious screenwriter best buddies or vindictive rivals? Why does an all-Black cast shooting a vampire movie find their star a bit…lethal? How does a glamorous bartender in a Hollywood tiki bar track the clues in a murder when it looks like a natural death? Can revenge last in the entertainment world, even into the retirement home?

In Entertainment to Die For, a Sisters in Crime Los Angeles anthology, you will find stories by first-time authors and stories by multi-published authors—all are killers (on the page, anyway). Sleuth along with the sleuths in these 18 suspenseful tales and solve the mysteries. Each story is a gem. Enjoy!