We have cover art!

Sisters in Crime Los Angeles has revealed the cover for our next anthology, Entertainment to Die For, which will include my short story "As Seen on Television". 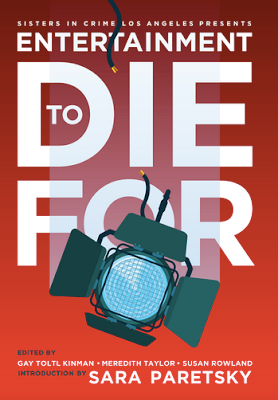 I like the red, very eye-catching! Also looking forward to Sara Paretsky's introduction.
I don't know the exact date - in the e-mail it said "early next year". I'm thinking March or April, because SinC/LA usually releases their anthologies around the L.A. Times Festival of Books, which will take place April 22-23 next year.
Posted by Melinda at 8:03 AM
Labels: Books, Cool Stuff, Crime, Entertainment to Die For, Festival of Books, Short Stories, Writers