So this popped up on my Facebook feed a few days ago: 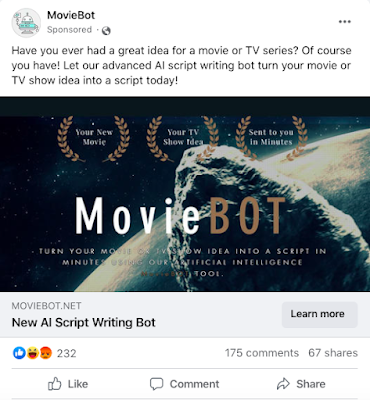 I've been seeing some disparaging remarks online about AI artwork recently, but this is the first time I've come across an AI writing program and I'm not sure what to think about it.
MovieBot will apparently take your brilliant idea that you can't seem to turn into an actual story and provide you with an outline to give you that kick-start you need. From their website:
All you have to do is give MovieBot a few ideas and our Artificial Intelligence will do the rest. Whether it's a comedy show about 3 friends from college, or a drama about a powerful family, in less than a day Movie Bot will have a script and characters for your project. It's super easy and super fast so get started on your project today!
As you go through the FB page and website, there are repeated references to the script MovieBot will provide, but if you read on what it actually does is provide is not a script but an outline for you to build on, along with some characters. Which is fine, but their material frequently references scripts rather than outlines. So let's be clear that this product will not write your script for you.
All debate about the use of AI aside, another thing that waved red flags at me were the multiple errors in the typography on the site. I had to make a correction just in the paragraph from the website I typed above. If you're trying to appeal to writers, you might want to have a good proofreader take a swing through your website. Just sayin'.

Regardless of what one's opinion of AI is, it appears that it's here to stay and we might as well get used to it. In that respect, is it really any different than any other program or method designed to help writers flesh out and develop their ideas, like, for example, Save the Cat? In fact, is AI no more or less problematic for writing and artwork than say, using Photoshop to alter an image? And if it helps jump start a writer who's stuck, is that really such a bad thing? On the other hand, would there be a stigma attached to a writer who employed AI?
With all this in mind, it's only $15, so it might be worth a shot to see if MovieBot might actually be helpful. I'm bogged down with schoolwork right now, but once I get on top of that, I might give MovieBot a shot and see what they can do.
Oh, and then there was the guy in the FB comments who pointed this out - South Park called it! 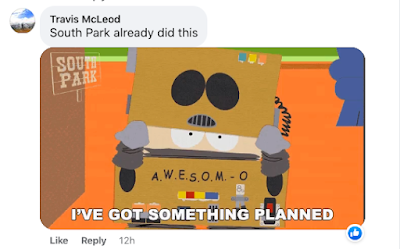 From the Wikipedia link:
During their visit to Universal Studios, Hollywood, two movie producers find out about the "robot" and decide to hire him to create movie ideas. Cartman, as the robot, comes up with over two thousand terrible, nonsensical film concepts (800 of which would star Adam Sandler), which the movie producers all find brilliant...Cartman flees the movie studio in panic after a film producer tries to engage in sexual activity with him, thinking that he may also be a "pleasure model."
UPDATED: Apparently there's an AI program for prose writers as well (that I wasn't aware of). Say hello to Sudowrite.
Posted by Melinda at 8:29 AM
Labels: Books, Film, I Customer, LOL, Screenwriting, Short Stories, Television, Writers, Writing