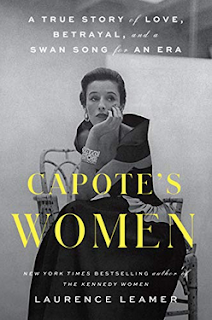 Capote's Women:
A True Story of Love, Betrayal, and a Swan Song for an Era
by Laurence Leamer
"Swans" was the word author Truman Capote coined to describe the elite society women who he had befriended and who took him into their confidence and sumptuous lifestyles. Babe Paley, Gloria Guinness, Slim Keith, Pamela Harriman, C.Z. Guest, Lee Radziwill, and Marella Agnelli were spectacularly glamorous, elegant women who started out with a certain amount money and privilege and married even more of both, often more than once.
These women fascinated Capote, who saw them as works of art, of "extraordinary presentation". In addition to being a complete package - beautiful, fashionable, intelligent, entertaining, and sociable - Capote appreciated the hard work they were willing to put in to maintain this presentation throughout their lives, while also maintaining the outward appearance of their supposedly enviable lives. As a flamboyant gay man he was no threat to their husbands, who often weren't all that concerned with their wives in the first place, and he became close to them, socializing and often traveling with them. And he collected their stories while never letting on that he planned on exposing them in a novel.
Having established himself as a author of note with the novella Breakfast at Tiffany's, Capote had supreme confidence that his writing talent was without peer and had decided his next act of literary genius decided would feature his swans and the stories and experiences they had shared with him in confidence.
Titled Answered Prayers - based on a quote attributed to St. Teresa of Avila, "There are more tears shed over answered prayers than over unanswered prayers," - the book turned out to be something that Capote was never able to complete. He began it in the late 1950's, but during the years he was supposedly hard at work on it, he was distracted by a murder in rural Kansas, putting Answered Prayers on hold to write the acclaimed In Cold Blood, which only increased his fame.
Finally, in 1975, hoping to whet the public's appetite for the book and prove he was making progress, Capote had a chapter entitled "Mojave" published in Esquire. This was followed by another piece, "La Cote Basque 1965". Contrary to Capote's belief in its brilliance, it came across as a gossipy exposure of stories best kept to oneself. To make things worse, in addition to exposing their personal foibles, the swans in this chapter were not only poorly disguised, but were also portrayed as shallow and tacky.
These women were shattered by this betrayal by someone they considered a close and trusted friend with whom they had shared some of their deepest, darkest secrets. Babe Paley never spoke to Capote again after "La Cote Basque 1965" was published. Slim Keith "...raged against him for the rest of her life." C.Z. Guest and Lee Radziwill, who hadn't been badly represented in the chapter, did remain friends, although Radziwill would cut ties over a later issue that threatened to drag her into a court battle between Capote and Gore Vidal. But for all intents and purposes, the Esquire article marked the end of Capote's charmed life among the elite.
Capote was out of the gilded cage he had so enjoyed being a part of that it had become part of his persona. His glory days were over, and despite staying in the public eye (more as a personality than an acclaimed author) his drug and alcohol abuse worsened and he continued to deteriorate until his death in 1984.
Capote's Women is the basis for the next installment of Feud, which I am really looking forward to.
Despite the initial fallout, Truman was convinced that once the swans realized how much they needed him, they would all come fluttering back. It did not happen. Truman's defenders dismissed the women whose stories appears in Answered Prayers as spoiled socialites who had finally gotten what they deserved. But these women were profoundly hurt. As they saw it, he had abused their friendship and betrayed them in a display of appallingly bad manners. He never should have been invited into their set in the first place.
Posted by Melinda at 9:50 PM
Labels: Books, Television, Writers, Writing