Yesterday, Barack Obama and his administration did something they should have done a long time ago: They released Obama's birth certificate.

It's about damn time.  I mean, what took them so long?  Especially since this is the official Obama/White House take (at least publicly) on the matter:


"The President believed the distraction over his birth certificate wasn't good for the country...it was bad for the American people and distracting from the many challenges we face as a country,"

"At a time of great consequence for this country--when we should be debating how we win the future, reduce our deficit, deal with high gas prices, and bring stability to the Middle East, Washington, DC, was once again distracted by a fake issue," Pfeiffer said. "The President's hope is that with this step, we can move on to debating the bigger issues that matter to the American people and the future of the country."

Really?  It's because they care?  Obama released the "certificate of live birth" in 2008 and despite the uproar that it wasn't sufficient proof and that supposedly "The President believed the distraction over his birth certificate wasn't good for the country", he waited until 2011 to put this matter to bed.  If it was so bad for the country, why didn't he just release it in 2008 and spare his supposedly beloved America from being "distracted by a fake issue"?  Is it because he's childish and immature and has to do things his way?  Because he felt it was politically advantageous to hold this matter over the heads of his opponents?


"We're not going to be able to solve our problems if we get distracted by sideshows and carnival barkers."

As usual, it was someone else's fault.  The guy is literally unable to accept responsibility for anything.

If it wasn't a legitimate issue but the ridiculous stuff of sideshows and carnies, why not release the birth certificate in 2008 and put this to bed quickly and easily?  By dragging it out for years it was Obama and his administration, not "carnival barkers" or those cahraaazy birthers, that made the birth certificate issue not only seem like a legitimate thing to question, but kept it in the news and turned it into a distraction and a sideshow. 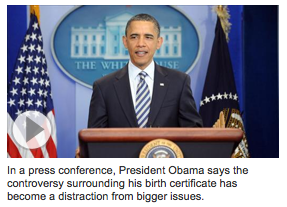 "I'll take Things That Are Bad For America for two hundred, Alex.  What?"

On a fictional side note I would really love to see the American Sideshow Carnival Barkers Association protest the President's characterization of them as nutjobs and the resulting backpedaling and obligatory apology, and possibly another beer summit.  Yeah, that's going in the script.


Mr. Obama said he has watched the debate over his birth place with bemusement.

Disingenuous much?  Because again, he could have easily quashed this matter years ago.  And since being born here is a requirement for the job, I'm not sure what was so confusing to him about people simply wanting this important matter cleared up, especially if it was something that could have been dealt with so easily.  A few years ago I signed up with a temp agency that asked me to bring in a copy of my birth certificate (among other documents) and you know what?  They got it.  It wasn't a big deal.  A friggin' temp agency. 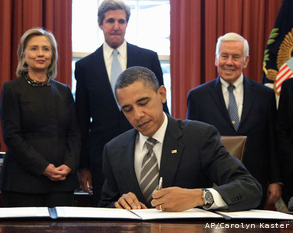 Why wait?  Why now, finally?

Fritzworth at Ace of Spades HQ has some interesting answers to those questions and I agree that #3 is the most telling and compelling (bold mine):


Obama has just handed the Republican Party an enormous gift in releasing his long-form birth certificate (or, as Obama curiously put it, "additional information"). Why does this help the GOP? Three reasons, at least:

1) It deflates (and may even kill off) the Trump candidacy. I see this as a great help to the GOP; your mileage may vary.

2) It provides every other GOP presidential candidate coverage on the birth issue ("Hey, he released his birth certificate. That's good enough for me."). For that matter, it should help relegate birthers to a much smaller corner of the GOP big tent.

3) It shows the internal stress that Obama and his camp are feeling.

Let's talk about that last item. Obama could have done this months or years ago, but didn't. More importantly, he could have held off for months more -- particularly until the GOP campaign was far more advanced, with various candidates committed (or not) to the birther issue -- and then released it to make birther-sympathetic (or even -agnostic) candidates look like fools. But he released it now. Why?

Well, it's hard not to believe that Drudge's headline of yesterday ("Only 38% of Americans certain Obama born here", or words to that effect) was a motivation. Likewise, it's hard to believe that the pending release (in three weeks) of "Where's the Birth Certificate?" by Jerome Corsi (currently #28 overall in books on Amazon) isn't a factor as well.

I think that Obama and his campaign managers are very worried. Poll numbers are dropping. Late night comics have started to turn on Obama. Even the New York Times noted that the QE2 flooding provided little stimulus but has fueled inflation. And...only 38% of Americans are sure Obama was born here.

In the game of Go, there is a concept called sente. If you have sente, it means that your opponent is forced to respond directly to each of your moves rather than carry out his own strategy. This release by Obama suggests the Republicans have sente right now. Obama has been trying to maintain (or regain) sente himself by attacking Ryan Paul Ryan and other fiscal realists as "extremists", but I think he's losing even that effort.

Even late night comics are turning on him?  Surely that's a sign of the Obamapocalypse.  You're talking about a guy who is notoriously thin-skinned and who thrives on political popularity (especially in the popular and mainstream media) and the tacit approval that popularity confers on him personally.

See, here's how I look at it: How can I use this in a script?  There are so many options.  The character whose citizenship is in question could be a power-hungry man-child who bristles at any criticism, no matter how increasingly legitimate it might be.  On second thought, that might be too obvious.

Obama would make a great fictional character.  Endlessly flawed but unable to see himself as the least bit lacking, surrounded by yes men and a yes media.  He dismisses his critics with a smug, narcissistic condescension that reminds one of a child who has to have the last word Every. Single. Time.  As a writer, I am endlessly fascinated by the flawed character that is Barack Obama.  Perfect characters are annoying and boring.  Heroes, like the rest of us, cannot be perfect, they have to their vulnerabilities.  There's a difference between vulnerability and weakness.  One is human and other humans can relate to it, the other is a character flaw.  Villains can't tell the difference, so they hide both their weaknesses and vulnerabilities behind destructive, anti-social actions.

The problem with this scenario is that Barack Obama isn't a fictional character.  He's real.  Very real.  And very flawed.  It would be nice to see him let down the facade once in a while and show some humanity that all of his constituents - not just those that kiss his ass - could connect to.  I'm not holding my breath.  I think he would consider that weak, not to mention he doesn't seem to feel the need to connect with anyone not kissing his ass.

Maybe he wanted or needed this to be a distraction.  But why?  What could be worse than being President without the birth certificate to back it up?  What even more nefarious plan or action is he trying to distract us from?  Dun dun DUUUUUUUNNNN!!!!

And that's the thing about Obama, at least in my opinion.  As a character, he's fascinating and watchable.  The audience would be waiting breathlessly to see what stunt he pulls next and even more importantly, gets away with next (with a big assist to his enablers in the media) before a true hero eventually brings him down.

I'm also fascinated by his tendency to bow to foreign leaders he has no obligation to kowtow to, especially those that rank among royalty in their own countries.  In my story, that's what he aspires to.  He doesn't just want to be President, he wants to be King.

BIDEN
I'm just saying, maybe next
time don't bow to the Saudi
King.  It looks bad to the
American people.

PELOSI
You know, the little people.


OBAMA
Fools.  I'll show them.
Someday I'll be king.  And
everyone will  bow down before
meeeee!!!  AHAHAHAHA!!!!

Podium pic snicked from Wall Street Journal article linked above
Signing pic by Carolyn Kaster/AP
Posted by Melinda at 12:41 PM Labels: I could use this in a script, State of the Union