Does it count as political intrigue when everyone knows about it?

Look, I'm sure every campaign these days has this kind of thing going on: Obama re-election campaign digging up dirt on potential opponent.


Despite New Jersey Gov. Chris Christie's repeated pronouncements that he will not seek the GOP presidential nomination, Obama operatives are compiling a dossier of what they call "opposition research" -- material that could be used to damage Christie if he changes his mind, The Post has learned.

"Compiling a dossier" = "Digging up dirt" in political parlance. In other word, President Hopey Change is willing to play dirty to stay on top, if that's what it takes. I'm sure the MSM will be all over these shenanigans (snerk!)!


The Obama campaign is trying to keep its efforts from public view, concerned they would only elevate Christie's already impressive standing within the Republican Party, sources said.

They've got that much right.  Playing dirty does have a tendency to make the other guy look good simply in comparison.  Seriously, these people make CREEP look squeaky clean.  Also, it's not keeping it from public view when the New York Post is writing about it and Fox News is discussing it on air.  Just an FYI, political geniuses.

"It would be irresponsible for them to not start looking at it," said a consultant who played a key role in Obama's 2008 campaign. "It would be malpractice for them not to."

"Preparation" = "Setting up a smear campaign".  To me, this is what you do when you can't beat them with your qualifications, experience and track record.  When you can't or won't take the high road, the only remaining option is the low road.  This kind of garbage may be politics as usual and SOP for these sleazebags, but the American in me still has the decency to be appalled by this kind of behavior.  And it certainly isn't going to get my vote.

The writer in me, on the other hand, is furiously scribbling notes: 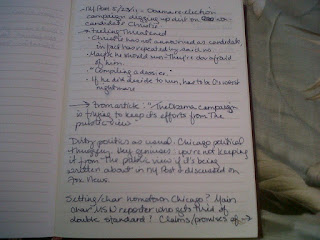 Update: This guy is going to be very busy between now and November 2012.


The post is a new one for this White House. Rapid response has usually been outsourced to the Democratic National Committee (DNC), if not done on an ad-hoc basis by administration officials. And it signals that the White House will be adopting a more aggressive defense of the president and his policies as his re-election campaign gears up.

I'm guessing one of the qualification for this position was "must be willing to play dirty.  Chicago political background desirable but not required."  And apparently the new Internets Czar is relishing his aggressive new role - in his first official, on the job tweet he introduced himself by tweeting this image: 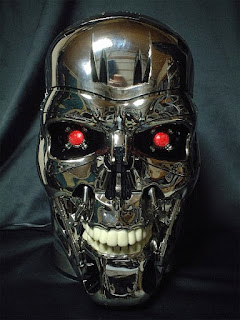 Michelle Malkin?  Terminated!  Ulsterman?  Terminated! Norma Jean Young?  Terminated!  Everyone in this convo?  Retroactively terminated to 2008!  Oh, and Hillbuzz, who had the nerve to point out this inconvenient truth about Jesse Lee's cool new job:


This position isn’t funded by the Democrat National Committee or Teh Won’s re-election campaign. It’s an official White House position, a government job, funded by the taxpayers of America, to stifle your First Amendment rights.

YOU ARE SO TERMINATED!!!

I guess I've answered my own question (posed in the post title).   Intrigue is all around us.  And it's very intriguing.

I can't take notes fast enough.
Posted by Melinda at 2:52 AM
Labels: I could use this in a script, Media, State of the Union, Writing