What I've been missing, courtesy of Hollywood Patch and Curbed L.A.

Still in Hawaii for ongoing family stuff.  Yeah, it's not the worst place to be stuck, but it's not home.

Luckily the internets are doing a pretty decent job of keeping me apprised of the goings-on back in the City of Angles so I don't feel so left out.  This is especially true of Hollywood Patch, which is rapidly becoming one of my favorite source for all things local.

Here are just a few examples of what's going on in crazy hometown in my absence:

Just another festive Saturday night in Hollywood: Shooting outside a Franklin x Cahuenga nightclub, pedestrian mowed down by party bus and left in grave condition, idiot runs out into lanes on the 101 and is left in dead condition.  People, if God wants you to be on the 101 he will put you in a car first and even then there are no guarantees.

Some friendly advice: Drunk in public is never going to work to your advantage and sex in a public place is a bad idea.  Not being a drunken slut willing to have sex in the Arclight garage would probably also help avoid awkward situations involving law enforcement, the media, and criminal misunderstandings.

How the heck did I miss this?  LAPD gun buyback program rewards include Ralphs and Visa giftcards.  I would rue not owning any illegal firearms but I would have missed it anyway.  I'll just have to continue have to pay for my groceries with cash and not by holding the place up.
Update: The buyback netted 2,000+ weapons, including "953 handguns, 688 rifles, 330 shotguns and 91 assault-style rifles".  That's a lot of giftcards.

The American Cinematheque is showing off its sense of humor with a Mother's Day screening of Mommie Dearest at the Egyptian this evening.  Tickets appear to still be available.

Via Curbed L.A. this happened at the Hollywood Roosevelt last week.  I'd have been there taking pictures if I'd been home, but instead we'll all have to settle for this awesome video:


It might have sucked to actually be in one of those rooms while this was going on, but I would have loved to have seen it.

On the upside, I also missed Jennifer Lopez at Hollywood & Highland, so I've got that working in my favor. 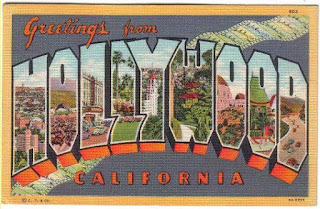