When in beautiful Kailua-Kona, be sure to take the Atlantis Submarine Tour.  Mom, The Bro and I did and we had a blast.

Passengers are taken out to the sub (which when surfaced can be seen from shore) via boat.  The trip out is only about 5-10 minutes, during which time the crew reviews safety precautions.   In fact, the entire tour only took a little over an hour, but a lot is packed into that hour.  The benefit of this is that you can easily fit an Atlantis trip into a day's itinerary with plenty of time to do other things.

Our guide was a very funny, personable guy who bore more than a passing resemblance to Zachary Levi on Chuck, in fact I don't remember his name because I just thought of him as "Chuck".  In addition to being a fun host, Chuck is also a Hawaii native and had great stories about his own experiences with Hawaiian reefs and ocean life that added an aspect to the experience that you just don't get with someone who is guiding a tour from a script, no matter how well-written. 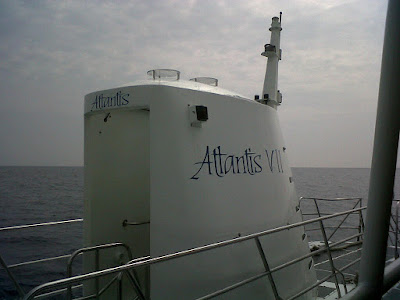 Pulling up alongside the Atlantis.  Forget everything you learned about submarine rides from Disneyland - this is the real thing!
The Atlantis descends into the coral reef slowly, eventually reaching a depth of 100+ feet.  On the way you get to see a ton of local sea life.  During our trip I spotted parrotfish, a puffer fish, butterflyfish, pennantfish, durgons and yellow tangs (see fish card at the end of the post).  No sharks though - they are nocturnal.  The tour also included a couple of sunken boats, including one that bit the dust after its owner got drunk and accidentally set it on fire.  Not to worry - the ocean and its residents have taken full possession of the boats and they now support vibrant reef life.  The thing about sunken boats is that until you see one up close and personal, you really don't get the full force of just how surreal it is, both in terms of seeing them dead on the ocean floor and how easily the sea co-opts them. 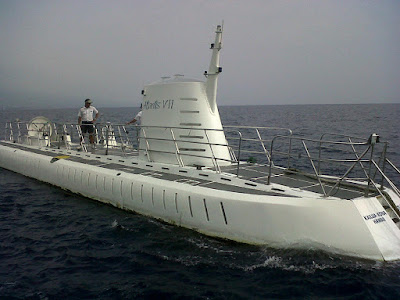 Our ride.
Some interesting factoids about the Atlantis tour:
One of the kids sitting with us in the sub was so taken with the experience that he announced to his dad that he wanted to be an "ocean scientist".  As for us, we had a great time and highly recommend the Atlantis tour. 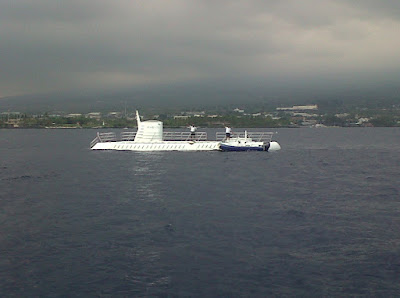 As we headed back to shore, Not Chuck told us that these crew members are contractually obligated to keep waving until we're out of sight.  We thought he was kidding.
A few days later I was hanging out at Old Airport Beach around 4pm and noticed a boat offshore that reminded me of the one that took us out to the sub, heading north away from Kona Village and toward the marina.  And sure enough... 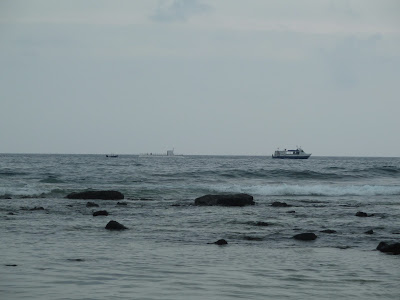 Hawaiian reef fish.  We actually saw some of these: 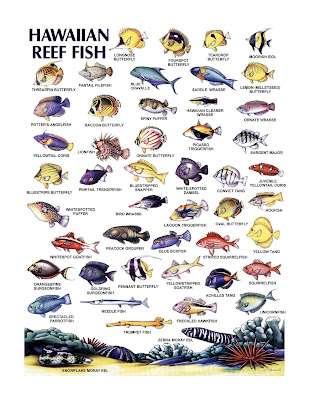