House of Davids is for sale. Davids included.

Hancock Park's infamous eyesore is on the market and it can be yours for a measly $2.1 million.  Why?  Apparently the novelty has worn off for owner and statuary aficionado Norwood Young.

But now he is done with the Davids, he says.

As long as the people who buy the house pay him, so be it if they strip it back to basic ranch.

"I wouldn't give a rat's behind what they did," says this man who has been singing professionally all his life and has grown tired of being known not for his voice but for his house.

Ah, I think I see the problem here.  House of Davids = famous.  Norwood Young...not so much.   To his credit, he is big enough to admit it and to admit that he let the idea of fame get the better of him.


But most people don't see the house and think Norwood Young, he says. Most people think Davids.

Young came to L.A. in 1994 seeking success and fame. When the Davids made news, he thought he'd found them...

"The idea was to ride the wave of the house and segue that into my music," he says. "But it didn't quite pan out that way."

The House of Davids became an L.A. celebrity. Norwood Young the singer did not...

But in 2007, he appeared on an E! Entertainment TV reality show, "High Maintenance 90210," ordering around a butler. He was on his way to becoming an Angelyne, famous only for pursuit of fame.

"My love for music never changed. My commitment to it did — " he says. "With the house came parties. With the parties came drugs. The drugs meant you didn't get up the next day at a decent hour, so life just went by. So for me, I just lived vicariously through the house."

Young is apparently a genuinely talented singer who suffered childhood sexual abuse, and good for him for surviving that.  As far as his career is concerned, the sad fact (as many people involved in creative pursuits can attest) is that talent and ability are not necessarily guarantees of success in the entertainment industry.   It sounds like he's reached a point in life where he just wants some semblance of normalcy, that he's realized that excess and outrageous behavior isn't going to fill any emotional voids.  Although if he still becomes renowned for his signing, that's okay too.  Wherever he goes next, I can't help but wish him the best, his horrific tastes in home and garden decorating notwithstanding.

The house and the Davids, on the other hand, have taken on a life of their own.  I always wondered what the neighbors really thought of it.  It will be interesting to see who buys the place and what they do with its unique landscaping. 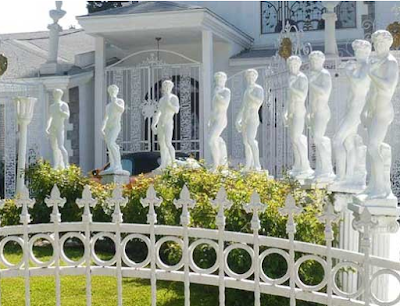 Image snicked from Curbed L.A. article.
Posted by Melinda at 8:36 AM
Labels: Los Angeles, Only in L.A.