Normally hockey fans dread the summer months because it's that sucky time of year we are bereft of our beloved greatest game on earth, but the summer of 2011 will go down in puck history as possibly the worst ever because of what happened repeatedly, rather than what wasn't happening at all.  This summer has been a hat trick of kicks to the gut.  Our guys are dying young at a horrifying rate and we don't know why.

Last week brought news of yet another casualty at a shockingly young age: Wade Belak found dead in Toronto.  He is the third young player to die in four months.  The past year has been rough for the sport, those who love it and most of all, those who play it.

When the news of Belak's death hit online it spread like wildfire and rocked the hockey world yet again.  No one saw it coming.  By all accounts Belak was fun, personable and well-liked; a devoted family man who was happy and busily moving into his post-career life.  He had been on Twitter as recently as the day before his death and gave no indication of being troubled at all.

It's hard to tell if it's a coincidence that so many of these untimely deaths struck the guys we call "enforcers" but there's definitely a trend emerging.  The spate of recent deaths even got the league on the front page of CNN.com:

The NHL has a serious problem - our boys are dying and we don't know why.   At least one former player thinks that the NHLPA could do more to help, especially after retirement:

But the problem is, what exactly is the NHLPA - or anyone else for that matter - supposed to do?  Everyone seems to be in the somebody do something mode, but what is that something?  The sport has always had its bruisers and in the past they didn't die off like this.  Why now all of a sudden?

The more I read about Belak, the wife and young daughters he left behind and the joy his character, personality and infectious enthusiasm brought to seemingly everyone who came into contact with him, the more upsetting the whole thing becomes.  There are just no answers to be had, only the same frustrating question over and over again: WHY???  Because until we know why, it's kind of hard to figure out what to do about it.

With all this in mind I leave you with a picture that was widely circulated online after the news of hockey's latest casualty: Wade Belak as a Maple Leaf, blowing a kiss to one of his kids.  I don't know how you go from this to taking your own life.  Even if it turns out that he was suffering from depression or something physical and just did a really good job of hiding it, surely this gives you something to live for, rather than arranging to prematurely meet your maker at the end of a rope in a luxury hotel far from home. 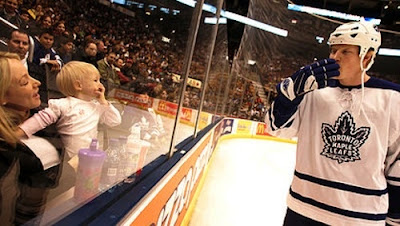 National Post: Belak death an end to a wretched summer - CNN.com: Why are hockey's enforcers dying? - Denver Post: NHL and its troubled fighters - TheStar.com: Belak silently suffered from depression - TheStar.com: "The sweetest, most gentle guy ever"

Fans get the bad news and react on the HF boards - Leafs fans react on HF - Kings Court says what we're all worrying about now: Why I'm Afraid For My Boys
Posted by Melinda at 4:32 PM Labels: Hockey