Well of course it's really a thing...everyone knows that

Apparently it's a slow news day in Toronto, so the NHL on Facebook poses this question: Is the shutout jinx really a thing?

Well of course it is, any hockey fan can tell you that.  For those of you ignorant of the greatest game on earth, it works like this: If your goalie starts the third period having not yet given up a goal and you comment about him working on a shutout, he will promptly give up a goal.  It's a proven scientific fact, and a frequent newbie mistake.

That doesn't mean I didn't learn anything from this clip, even though I've always believed the jinx only applies to fans.  Announcers pretty much have to mention it, but as the saying goes, timing is everything.


No shutout for you! 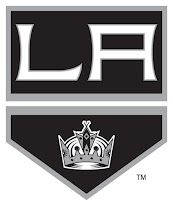 In Kings news, Jonathan Quick is headed to Ottawa this weekend for a richly deserved appearance in the NHL's All-Star Game.  Quick hoards shutouts like apartment-dwellers hoard quarters for the laundry, but he can probably forget about a shutout Sunday whether anyone mentions it or not.  The All-Star Game is not like other NHL games and the goalies tend to get torched.  The important thing is that he's finally getting league-wide recognition *cough* westcoastbias *cough*.

After not showing up when we did last Saturday, the Kings lit into the Ottawa Senators Monday night at Staples Center, beating the Sens 4-1.  Maybe one day they'll play like that when The Brother and I are actually present at Staples.  Quick lost the shutout in the third because some idiot obviously blurted out the S-word.  The Kings scoring featured a penalty shot goal by Trevor Lewis, but the highlight of the game was Kyle Clifford finally nabbing his first NHL Gordie Howe Hat Trick (he also had one in juniors).  Now maybe the Team LA Store will deign to actually carry his jerseys.  Kings Nation loves Cliffy to death; there's no way there isn't a significant demand for items bearing lucky number 13.

Lastly, we are currently in the midst of a Kings drought that will be sending the royal purple faithful into agonized withdrawal.  After the Ottawa game, they don't play again until next Wednesday, a scorched, Kings-free desert wasteland of over a week resulting from the All-Star break and a scheduling quirk.  Hopefully they'll all be rested and ready to break open the goal scoring floodgates upon their return to action.  GO KINGS!!!
Posted by Melinda at 9:26 AM
Labels: Hockey, Los Angeles Kings