Screening: The World's Greatest Cartoons at the Alex Theatre

The Brother and I decided to check out the annual post-Christmas cartoon fest at the Alex (presented by the Alex Film Society) last weekend. 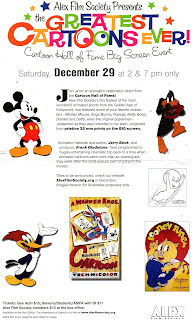 I usually enjoy screenings at the Alex, but this one was unfortunately a bit of a letdown.  For some reason I was expecting a couple hours of non-stop classic animation, but only ten were actually shown and the two-o'clock screening ended well before four.  In addition, the advertising was a bit misleading - of all the characters shown on the flyer, only Bugs and Daffy were shown.  I would have liked to have seen some old black & whites (particularly Betty Boop).  They were supposed to screen a Koko the Clown short, but apparently it's an old print and there was some concern that it wouldn't hold up, so it was replaced with Madeline.
The screening was halted every couple of cartoons by an animation historian and Alex Film Society rep, who would give us some historic info about the next couple of cartoons.  It was interesting, but could have been included in a handout.  More cartoons would have been preferable, especially in a program called "World's Greatest".  There were a lot of kids in the audience and it was a kick to hear them laughing at these decades-old cartoons, but they got restless during the talks.
Posted by Melinda at 4:54 PM
Labels: Screenings