The classic Sunset Boulevard was screened Saturday night at the historic Alex Theatre in Glendale as part of a tribute to director Billy Wilder. 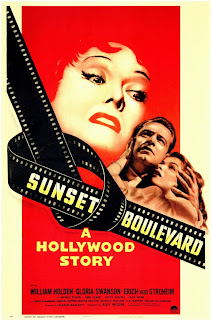 Joe Gillis (Holden) is a failed screenwriter on the verge of having his car repossessed and his Hollywood dreams dashed.  While trying to evade the repo men, a blown tire sends him into the driveway of a seemingly deserted old Hollywood mansion that turns out to be occupied by forgotten silent film star Norma Desmond (Swanson) and her devoted butler Max (von Stroheim).

Norma Desmond was once one of the greatest stars in Hollywood, but those days were ended by sound.  But while the world has moved on, time has stood still for Norma.  Her home is still decorated in the fashion of her Hollywood heyday and is a shrine to Norma Desmond, movie star, littered with countless pictures of Norma in her heyday and a screening room where only her old films are shown.  She even retains the exotic, expensive car purchased during her glory days - a leopard upholstered 1929 Issota-Fraschini.

Norma is under the delusion that fans eagerly await her return to the screen and she plots her comeback with a film version of Salome that she has written herself.  When she discovers that Joe is a screenwriter she ropes him into reading the self-indulgent, horrifically written script, which she plans on sending to her former director, Cecil B. DeMille.  Broke and in debt, Joe leads Norma into hiring him to polish the script for her.  But he has no idea what he's getting into, as Norma becomes increasingly controlling and infatuated with him, while keeping him financially dependent on her.  As the months pass, Norma's desperate desire to reclaim her stardom pushes her further away from reality.  When Joe falls for a beautiful young aspiring screenwriter (Olson) while working on a script with her behind Norma's back, deadly jealousy sends the former star completely over the edge.

Sunset Boulevard is merciless in its portrayal of the cruelty Hollywood can inflict on those desperate for its approval.  When Norma shows up on DeMille's set to discuss Salome, one of his crew comments, "Norma Desmond?  I thought she was dead."  Another cracks, "She must be a million years old."  They don't mean to be cruel, but the comments reinforce the reality that Norma's days in the spotlight are long gone.  DeMille, while fond of Norma, doesn't have the heart to tell her that Salome - still an awful script - is never going to happen, especially not with her in the youthful title role.  And in a particularly cruel twist, it turns out that the phone calls coming from Paramount - which Norma believes to be DeMille's attempts to set up the project - turn out to be from another producer on the lot who spotted the unusual Issota-Fraschini and wants to rent it for a Bing Crosby movie.

Norma is 100% movie star, in every aspect of her life, even after her stardom has long passed.  Her whole life is a performance.  She is incapable of moving on without the adoration of "those wonderful people out there in the dark" and it is her undoing.  It doesn't help that the devoted Max (who in a particularly disturbing scene, is revealed to not only be a former director of Norma's who originally discovered her, but also her first husband) plays along with her delusion in an attempt to protect her fragile psyche.  It is Max who writes the fan letters that keep alive Norma's dreams of returning to the screen and Max who refuses confirm the real reason for the calls from Paramount.  And in the end, after Norma has completely broken with reality, it is Max who directs her down the staircase as news cameras roll, culminating in the famous line, "All right Mr. DeMille, I'm ready for my closeup."  But it is her comments a few moments earlier: "This is my life...there's nothing else...," that tell you everything you need to know about Norma Desmond and why she was unequipped to deal with life outside the Hollywood spotlight.

Some Sunset Boulevard facts and trivia:
Karl Silvera, a former makeup artist who worked on Sunset Boulevard, was the guest and despite being ninety-five years old, is still very mentally sharp and had some lovely comments about his experiences working with Wilder and the cast.  I could have listened to him all night.  He was a very gracious gentleman and I'll bet he has some amazing Hollywood stories.

The film was preceded by a Warner Bros. short, A Star is Bored, in which janitor Daffy Duck, jealous of Bug Bunny's film success, ends up serving as Bugs' unfortunate stunt double in a stab at attaining stardom. 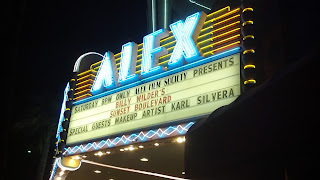