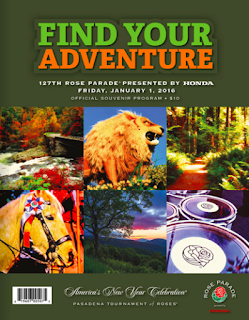 The Rose Parade, a Southern California institution, welcomed the New Year for the 127th time, and as usual, it was spectacular.

One of the most significant aspects of this year's parade is that it's the last year that Bob Eubanks and Stephanie Edwards will host KTLA's local broadcast (the go-to Rose Parade broadcast for Southern Californians) after thirty-four years. It's hard to imagine hearing other voices host the legendary parade. Here's what they themselves have to say about it via KPCC.com.

As always, it was a treat to listen to Bob and Stephanie as the floats, marching bands, equestrian units and classic cars made the famous turn from Orange Grove onto Colorado Boulevard. Here are some that really caught my eye:

You bet I got choked up when Bob and Stephanie signed off for the last time. It's tough to see them go.

The Rose Parade continues to be a bright spot in Southern California and the world, a joyous kickoff to a new year. Congratulations to the City of Pasadena, the Pasadena Tournament of Roses and KTLA Los Angeles for another amazing presentation.