Memoirs of a Professional Cad by George Sanders

Part biography, part observational offering, Sanders' memoir is a collection of essays about various points and aspects of his life and career. Sanders is probably best known for his Oscar winning role as ascerbic critic Addison DeWitt in All About Eve. He also had a key role in another one of my all-time favorites, Alfred Hitchcock's Rebecca.

This was a lot less caustic than I was expecting, but that probably has a lot to do it being written and published shortly after he married Benita Hume, widow of Ronald Colman. Over the years, Hume (as Mrs. Colman) was a noted hostess of Hollywood parties and constantly tried to play matchmaker for Sanders. After she was widowed, he suggested she fill the role of the next Mrs. Sanders and eventually she did. In a 2014 afterword by Sanders' niece Ulla Watson, she mentioned that the period when this book was being written as the happiest time of his life, which only lasted about another seven years until Benita's death. Knowing in retrospect how his life went downhill after she died (he committed suicide in 1972) it's sad that his joy was so short-lived. No mention is made in the book of his sad end.

Some of the book is strangely touching. Sanders is at most gently mocking of first wife Zsa Zsa Gabor. He mentions her coterie of publicists, stylist, etc that took over their home, and how much they appreciated how after arriving home from work, Sanders would play bartender, mixing and serving drinks for them. He is extremely complimentary to her, mentioning that she was a great travel companion even when conditions were less than ideal, and stated that they got along better after their divorce than when they were married.

Sanders fell into acting quite by accident. After being fired from a series of jobs he wound up in an advertising firm where a beautiful co-worker encouraged him to check out her theatre group. The co-worker was a pre-fame Greer Garson, the theatre group launched him into his new career, and he never looked back.

Some of Sanders' views on non-acting topics like bachelorhood, women and wars might be kind of out there, but he's obviously put some thought into them. For me, the best parts of the book are his behind the scenes recollections of Hollywood and his fellow globe-trotting actors, including being on the set of Solomon and Sheba when Tyrone Power died unexpectedly.

I never really met Zsa Zsa. We collided in New York at a party given by Serge Simonenko, the banker. It was followed by a drink at her plush red satin draped penthouse apartment which set off a chain reaction of collisions. We collided in Bermuda, in Nassau, in Cuba, in Hollywood, and finally in Las Vegas where we also collided with a minister who put an end to all this nonsense with a ring. 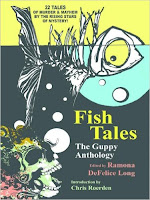 The Guppies (short for The Great Unpublished) are a subgroup of Sisters in Crime, and serves as a support group for aspiring crime writers, providing a safe haven where writers in progress can congregate and support each other, and where published writers can offer their expertise and encouragement.

The organization recently issued a call for submissions to their next short story anthology and I want to submit, so I decided to check out the other anthologies (this will be the fourth) to try and get an idea of what they're looking for. I already had two downloaded onto the logjam that is my Kindle.

Each anthology has a theme. The theme for the upcoming anthology is "Fish Out of Water". Fish Tales had a much simpler theme - stories simply had to involve a body of water or a location near one.

The stories run the gamut from a few where I felt the endings/ reveals were somewhat predictable to some really neat stories. There were also several "name" authors that I've become familiar with from their appearances at conventions, which kind of bothered me. If the whole idea of the Guppies is to support the great unpublished, I kind of wonder why established authors are submitting. Maybe they weren't all that established at the time this anthology was published.

The part I was most impressed about was the variety of how the theme was used - if I hadn't already known, I'm not sure I would have picked up on it.

Now if I can just finish my story by the March 15th deadline...

Killing Clark was easy. After all, I'd had good teachers in stir. Those bums had been caught, sure. But most of them had gotten away with three or four times as much stuff as the cops would ever know about. There's no better place to learn how to commit a crime than prison.

The first novel from Ryan, an award winning investigative reporter, was inspired by a spam email she received one day at work. The novel won the Agatha for Best First Novel and Ryan's books have been awards magnets ever since.

I started this on the plane to Phoenix for Left Coast Crime and it hooked me immediately. Like Ryan, Charlotte "Charlie" McNally is an award-winning investigative reporter for a Boston TV station. While looking for a big story for November sweeps, she gets drawn into a mystery concerning a possible whistleblower for a pharmaceuticals company who had sent Charlie an odd email the day before his mysterious death.

Ryan knows the world of investigative journalism inside out and she's deft at explaining that world with a great deal of simplistic clarity, while never talking down to the reader.

This is simply unfair. She's assigning me vulture patrol. I loathe vulture patrol. I paid my on-the-street dues for years, trying to convince the brokenhearted and miserable there was some noble reason they should go on camera. I'm supposed to be done with all that now.