My judgmental, obnoxious review of Phoenix and the Left Coast Crime event hotel

At the risk of sounding like an L.A. snob, I have to say I found my visit to Phoenix to be, well, somewhat underwhelming.

It started off really well. I took the Sky Train at the Phoenix airport to the light rail station located right outside the airport (pay attention, LAX). Two bucks for a one-way ticket and I was off, a straight shot through what I assume was the more rural part of town and into downtown Phoenix. My stop was maybe a block to the Hyatt Regency, home of Left Coast Crime 2016. So amazing.

It was close to 1:30pm when I arrived, and check-in isn't until 3pm. It's never been a problem before (hell, the Bouchercon hotel in Raleigh checked me in at 11:30am) but I was informed that they didn't have any rooms with king-sized beds available yet for early check-in. They did have rooms with two double beds which is actually what I prefer - one bed for me and one for my suitcase and other crap. I was in my room by 1:40pm.

Before I start with the bitchfest, I have to say that this hotel had a couple of things going for it where the conference was concerned. The second floor, where the meeting rooms are, is big and open and never felt overly crowded. And I don't know who the woman is who was going from room to room making sure the microphones and sound were working, but she should be at every writers/book conference. Every panelist had their own mic and they all worked perfectly. Anyone who's been to Bouchercon the past couple of years knows what I'm talking about. Sound Chick was even doing a sound check prior to the Gregg Hurwitz interview and as a member of the audience, I'm grateful to her and the hotel that I never had a problem hearing any of the speakers.

Oh, and did I mention that Phoenix has light rail directly from their airport to downtown? Seriously, I can't tell you how impressed I was by it, and by how easy it was to use. Also, if you need to go to Phoenix for a concert or sporting event, this hotel's location is perfect. It's across the street from the convention center and just a couple blocks from their baseball stadium and another venue that's the home of their NBA team and also hosts concerts. The Hyatt gets an A+ for location. Oh, and also for its free wi-fi, which worked perfectly.

Okay, that's enough of the niceties. Now onto something I'm really good at: bitching about everything from the point of view of a really picky customer. 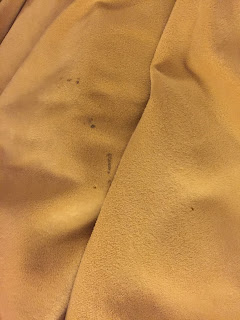 Phoenix itself didn't do anything for me. I walked to a couple of places a few blocks away several nights to pick up dinner and the first night, Thursday, there must have been panhandlers every ten feet. Way above and beyond anything I've ever seen, including in downtown L.A. or when I lived in Hollywood. After that I didn't see them as much, as if someone with the city realized they had a convention going on and rounded them up. A fellow convention-goer told me that she had talked to some locals (wondering why there weren't more people out and about) and they told her that attempts to revitalize downtown Phoenix haven't really worked out, at least not yet.

The upside of Phoenix was that I wasn't crushed when I had to leave (lookin' at you, North Carolina) and from a travel standpoint it was a lot easier getting to and from than other places where I've had to leave at night and catch a connector flight. I left my home on Wednesday around 8-8:30am and was in my hotel room by early afternoon. To get home Sunday, I left at around the same time, took the train to the airport and had a one-hour flight home. Grabbed my luggage and the bus to Lot C, stopped at the store to pick up some things and was home around 1:30pm, instead of late night as usual. I still had a whole day left. That part of it was great.

Posted by Melinda at 12:48 PM
Labels: I Customer, Writers' Conferences