We got a great demonstration this morning of how emergency personnel respond to a car crash. Not only did the usual suspects show up (fire, paramedics and ambulance) but we got a helicopter too! 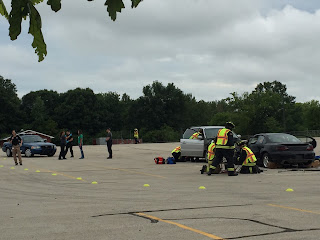 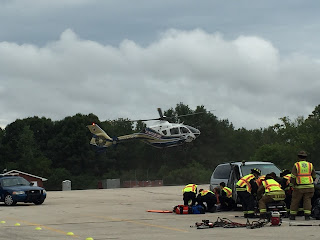 I took about 100 pictures of the whole thing and they can all be found here. I'll be adding more from the rest of the weekend soon.


Expert Witness and Grand Jury Basics (Instructor: Robert Willis)
This class was taught from the point of view of law enforcement charged for actions taken in the line of duty.


Why They Were Bad: Nuances for Characters, Psychopaths and Other Disorders (Instructor: Dr. Katherine Ramsland)
Dr. Ramsland is a forensic psychologist and prolific author. Her latest book (to be released August 30) is Confessions of a Serial Killer: The Untold Story of Dennis Rader, The BTK Killer. She described the book as a "guided autobiography" and proceeds from the book will benefit the families of Rader's victims.

Some disorders:
She also spoke about dealing with Rader over a period of several years to draw out the information for her book. One of the things he told her to do was watch Bates Motel. She binged it and got hooked. Said the show did a great job of developing Norman's deterioration and development. Rader also showed her plans he had designed for a torture house inspired by H.H. Holmes.

Dr. Ramsland also highly recommended Conviction: The Untold Story of Putting Jodi Arias Behind Bars by Juan Martinez (the man who did it). At one point in her trial Arias wanted to act as her own attorney. She didn't, but Dr. Ramsland seemed to think it would have been entertaining as hell if she had.

Clinical Interview: Getting the Goods (Instructor: Dr. Katherine Ramsland)
The objective of this class was to learn components of psychological evaluations in a forensic context.

In clinical interviews you look for themes even if the interviewee is trying to hide things. The thing I got out of this class, which I think some of the other people involved may have found confusing, is that you're not there to interpret, you're there to observe. You're there to interview, not interrogate.

When interviewing subjects Dr. Ramsland observes gestures, posture, speech, expressions, clothing, anything in how the person presents themselves to the world that might invite social judgement.

There is no one thing that indicates that a person is lying. A group of red flags may indicate lying. You also need a baseline to judge against - many people have nervous habits or expressions that are normal for them and shouldn't been interpreted as something else.


Private Investigation: Or How To Be a Dick For Fun and Profit (Instructor: David Corbett)
This was an extremely popular class - we were packed into the classroom like sardines.

Corbett has worked several high-profile cases. His firm was employed by the insurance company that had issued life insurance policies to Jose and Kitty Menendez, after the couple's sons Erik and Lyle filed claims while being investigated for the murder of their parents, crimes for which they were eventually convicted. Because the insurance company had a reasonable belief of a fraudulent claim, they were able to sit on it while the investigation played out. He also worked the first Michael Jackson sexual abuse investigation and very calmly referred to the late pop star as a serial pedophile.

How to Use - Or Not Use - What You Learned at Writers' Police Academy (Lee Goldberg)
I've seen Goldberg at a number of events (Bouchercon, Left Coast Crime, California Crime Writers, L.A. Times Festival of Books) but I believe this was his first appearance at WPA, and it seemed like he had a blast. Aided and abetted by his brother Tod (they both recently made the New York Times bestseller list at the same time), Goldberg was his usual hilarious self. Some advice he gave us:

Goldberg also said that the best thing that ever happened to his novel writing was writing for television, because it forced him to tell stories through action and dialogue, rather than exposition. And as always, he had a great story from his TV writing days, this time about working on Hunter  and how Fred Dryer reamed him because he failed to include the "drive-up" in his scenes (Dryer: "The 'drive-up' is the scene where I drive up.")

Since I hadn't slept on my Wednesday/Thursday red-eye and barely slept Thursday night, I skipped the evening festivities (Sisters in Crime Reception and Live-Action Scenario). I actually dozed off around 6:30 for a couple of hours. I really wish I could sleep on planes.

Next up: Saturday classes and my PIT maneuver epic fail!

This is very nice informative Article, thanks for sharing the Useful Information.