Saturday started off with a bang - we were getting a lecture about terrorism when we were terrorized ourselves with an active attacker. Several "victims" staggered in, where they were helped by NWTC staff as well as some attendees who I believe were recruited during a first aid class Friday. Then the cops showed up.

One of the things we learned in this class is how fast a person can bleed out: as little as 3-5 minutes, so tourniquets can be a lifesaver if pressure isn't enough to control serious bleeding.

The recruits came in on their day off for us. They didn't screw around, either. These guys are tough. If you hadn't known it was a demo, you would never have guessed.

More pics are here in my Writers' Police Academy 2016 album on Flickr.


Mashed Potatoes of Death: Are You Going To Eat That? (Instructor: Dr. Denene Lofland) 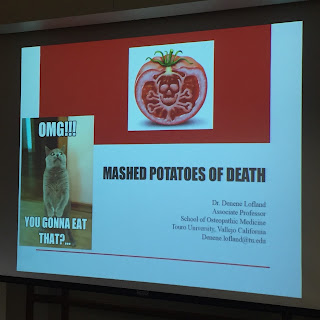 You know, it's actually pretty terrifying how easily you can poison someone just by feeding them. I'm not saying you'll get away with it, just that it can be done.
You can visit the Center for Disease Control's website for information regarding food recalls (or as Dr. Lofland called it, "What's poisoning us this week."). They will even give you the lot numbers of the products. Good resource, because by the time you hear about recalls on the news, people are already sick.


Fingerprinting (Instructor: John Flannery)
I didn't get as much actual dusting and lifting as I did at this previous WPA class, but I did finally learn about the actual patterns, something I'd always found confusing. Some fun factoids about prints:

We dusted in a room that I think was being used for the Death Scene Investigation Classes. The guy on the floor is Deadhead Joe. He's very dead. We just worked around him. 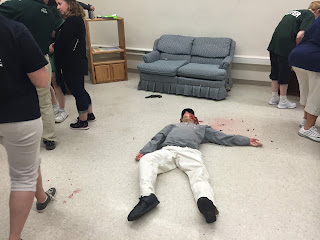 PIT Maneuver (Instructor: Colleen Belongea)
I was really excited for this class, which made it even sadder that I didn't pull off the maneuver. I was the second person to go, and we were advised to back off around curves, then gun it to catch up on the straightaways. In the final turn, the guy driving the other car slowed way down to let us PIT, but I didn't realize that until I'd already had my chance, then watched most of my classmates doing it. I gunned it after the final turn and blew past him. Twice. Once I figured that out, I was hoping to get another shot at it, but the next class showed up and we had to leave (the PIT track was at a separate location from the rest of the classes). Still, it was fun and strangely bonding, as we cheered each other on. And Colleen is a rock star instructor among a field of rock star instructors. We just loved her. I do feel kind of like a jerk that I don't remember the name of the guy who drove the other car, because he took a lot of abuse. He must have been dizzy as hell after being spun around all day.


10 Common Mistakes Writers Make About the Law (Instructor: Leslie Budewitz)
I only caught maybe the last 15 minutes of this class because of coming in late from the PIT track. How good was this class? In the brief time I was in it, I took three pages of notes.

Leslie is the current President of Sisters in Crime and I met her very briefly at the Thursday Guppies lunch (at which she told us the class was expanding to twelve common mistakes). She is a lawyer in Montana and writes cozies. Crazy, huh?

Some of the common mistakes:

Later that evening I attended the WPA banquet, where Guest of Honor Tami Hoag spoke to us. I also won this in the raffle, and needless to say after the Mashed Potatoes of Death class got all sorts of unsavory ideas about Killer Tomatoes. In fact, I think I've got a short story out of that one.

Gotta say, as much as I hated to say goodbye to WPA's North Carolina location (I have a crazy love for that place) Northeast Wisconsin Technical College rocked, plus having the hotel right across the street from the airport and ten minutes from the college was really convenient. Looks like Green Bay is going to be the home of WPA for the foreseeable future and I think it's a great fit.

The guilty/not guilty gets changed to guilty/innocent in newspaper reporting. Less chance of the small word "not" being either dropped or added. Although the report from the court is guilty/not guilty.

Make sense, but all the more reason we have WPA to set us straight on how things really work. Also, it's fun as hell.