Another Bouchercon - my third - is in the books. This year's event was held in New Orleans, which is my new favorite place on the face of the earth. If someone could have just shipped Sophie to me, I could have just moved into that hotel room permanently. I didn't even mind the god-awful humidity. It feels weird to know that I've already been home for three weeks. Mentally and emotionally I'm still back in Louisiana. Get this girl some gator bites.

One of the great things about this year's Bouchercon was that instead of packing the book bags with random books as they've done in the past, everyone got to pick six books from the "book bazaar", many of which were from authors who were appearing on panels. It was hard to pick just six, there were so many good ones available. But good idea, not to mention it probably saved the volunteers tons of time not having to pack the bags.

Here are my Thursday panels: 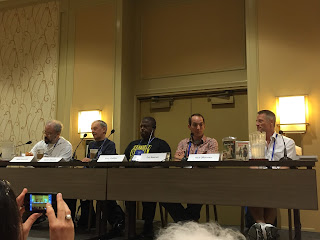 The panel was asked to discuss writers who are not as well-remembered as say, Chandler and Hammett, but who in their opinions should be. Here are their picks and reading recommendations:

Edwards: Michael Gilbert - A prolific British author of crime and spy novels, as well as numerous short stories. He was a lawyer and did a lot of his writing on his commutes to and from work. Ironically, Raymond Chandler was once a client of his. Recommended: Smallbone Deceased, Death in Captivity.

Ollerman: Peter Rabe - Fled Nazi Germany and landed in the United States as a teen. In addition to his crime novels, he also wrote a couple episodes of Batman. He was once misdiagnosed with terminal cancer (he was accidentally given another patient's diagnosis). His take on noir: "You start out screwed, you end up screwder." Recommended: Kill the Boss Goodbye, The Silent Wall.

Phillips: Clarence Cooper, Jr. - An African American author whose stories revolved around Black American life at the time, especially in regards to  violence, drugs and jail, the last two of which Cooper was well acquainted with. He started out as a newspaper editor, but his heroin addiction landed him in prison, where some of his books were written. Unable to get a handle on his drug problem, he died in his mid-forties, destitute and strung out. Recommended: The Scene, The Farm. 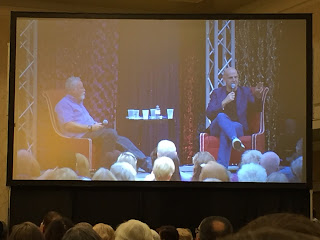 Connelly interviewed Coben in front of a packed house. Coben is the author of thirty novels, plus he is also the creator of a British series called The Five. His bestseller Fool Me Once is in development with Julia Roberts attached, with Coben writing the script. Some other things discussed: 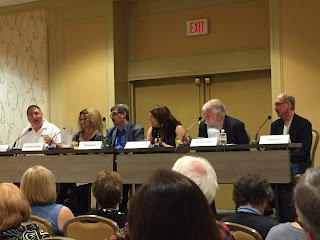 Goldberg has been at almost every book event I've attended the past few years, and he's always entertaining. In fact, I just saw him at Writers' Police Academy in August. Despite the title of the panel, they discussed adaptation more than seeing their characters brought to life. 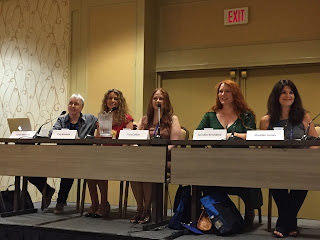 How to navigate the internet, social media and self-promotion as an author was the focus of this panel. Some of the advice: 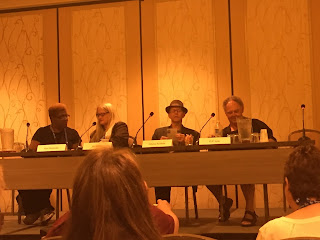 It was a long day - Friday was a bit more sane and is up next.