"Stay afraid but do it anyway. What's important is the action. You don't have to wait to be confident. Just do it and the confidence will follow." --Carrie Fisher

Carrie Fisher passed away this morning at the age of 60. Who would have thought that as far and away the youngest of the original Star Wars trio, that she would be the first to die.

I only just saw her one-woman show Wishful Drinking a couple months ago (on DVD) and was impressed how she could find such entertainment and humor in what was not always a happy or healthy life. Her biography is well-known enough that I don't need to repeat it here, but in addition to her fame and the Hollywood privilege she was born into, the woman dealt with a lot demons. She was a survivor and will be missed by a lot of people. I only wish she had at least lived long enough to survive her mother - having to bury your child has got to be the worst thing imaginable, regardless of their age.

TCM has had to update its 2016 "In Memoriam" segment twice, to add Zsa Zsa Gabor and now Carrie. We've got four days left, here's hoping they don't need to update it again. 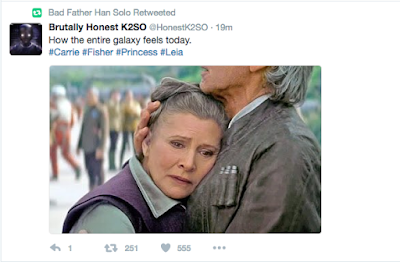 Updated 12/28/16: You can't make this stuff up - the day after Carrie's death, her mother Debbie Reynolds has died. Singin' in the Rain was one of the greatest things ever. I think everyone knew Carrie's death would be crushing for her, but not this fast. Condolences to everyone involved.