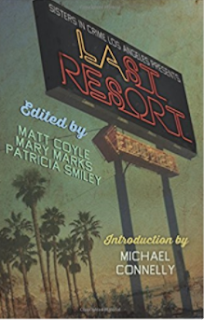 The release date isn't until April 17th, but Amazon is already shipping LAst Resort. I had preordered and Mom and I received our copies on Thursday. So I'm officially in print for the first time!

You can (if you're so inclined) order it here.

It's so weird seeing my name in a book. It's also weird seeing the story (Crime Drama/Do Not Cross) in a book as well - I've only seen it printed out on 8x10 paper. It's just so surreal. It's also something I could get very used to.

LAst Resort editors and contributors will be doing author panels at The Last Bookstore in Downtown L.A. on June 17 and at Vroman's in Pasadena on July 8. In addition, Sisters in Crime L.A. always has a booth at the Los Angeles Times Festival of Books (April 22-23 this year). My editor, Matt Coyle, will be signing at the SinC LA booth, but I'll probably miss him as I'll be standing in line to get my copy of LAst Resort signed by Michael Connelly during the period Matt is scheduled.

Big thanks to everyone at Sisters in Crime Los Angeles for the opportunity, and to Matt for being such a kickass editor.

Update: Shortly after I posted this, I got an email from SinC LA asking if I would like to participate in an author panel at Santa Monica Public Library in Ocean Park on June 24. Of course, the answer is yes. Other authors on the panel are Craig Faustus Buck, Vanessa A. Ryan and Laurie Stevens. It will be at 2pm. Drop by if you get a chance!

Congratulations! This is fantastic and many more good things to come for you.