How not to fly the friendly skies

Add United Airlines to the list of companies that don't know how to customer service.

United overbooked a flight, then asked for volunteers to give up their seats (for a premium, of course) because they had four employees who needed to be "repositioned" for another flight. Unfortunately they didn't get enough volunteers, so chose some poor schmuck at random to be "deplaned". Turns out the poor schmuck didn't want to leave, so he was forcibly removed...and roughed up in the process. And of course there's a video.

The situation was only worsened when United released their official announcement about the fracas, and of course, Twitter got into the act. 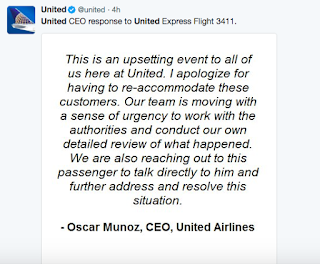 With the recent Pepsi Cola fail, the inevitable "hold my drink" tweets started popping up.

#BoycottUnited promptly went into overdrive. Not only is this event going to cost United potential future customers, it's also costing them long-time flyers: 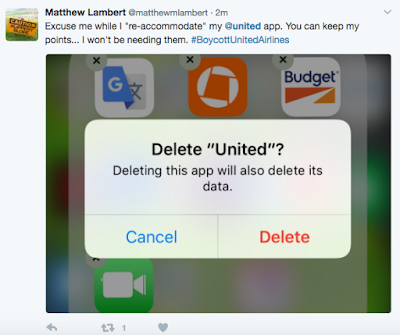 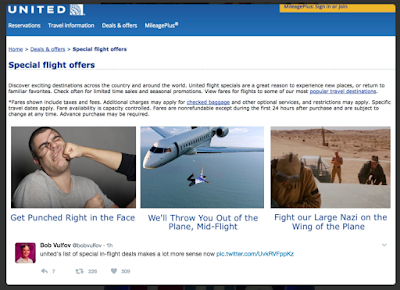 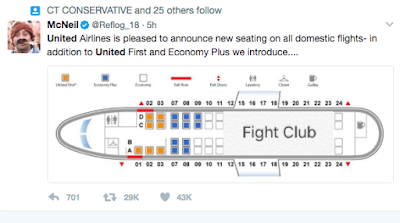 Hopefully United can look for the silver lining...

This is really bad. UA is not only going to probably have to pay that guy millions, but it could really impact their business for months if not years to come.

And I agree with the guy who suggested Oscar Munoz update his resume. He should have promptly owned up to how awful this was. Instead he released an anemic PR statement that only exacerbated the fallout.

Posted by Melinda at 1:48 PM
Labels: I Customer, Jerks, Twitter