When you piss off sports fans, then want their help

I'm not a football fan, but even I know it's sport for a lot of people to disparage New England Patriots quarterback Tom Brady. For the most part, it seems to reek of jealousy. The guy is hugely successful, and never were his haters thwarted more than last January, when it looked like the Atlanta Falcons were burying the Patriots in the Super Bowl, only to see Brady quarterback the Pats to a comeback for the ages.

Last weekend, at the Boston Marathon, this guy made a sign to encourage the runners, and someone posted it on Twitter: 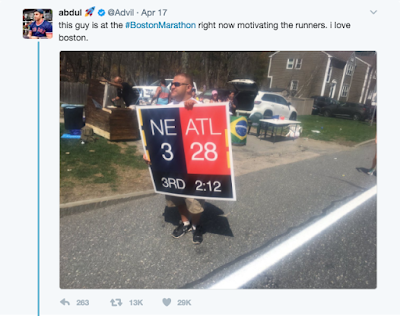 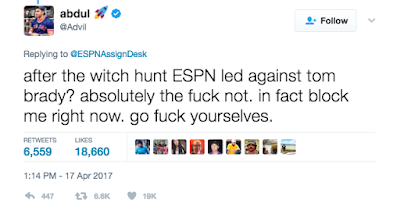 ESPN has been shedding viewers for a while, pissing off a lot of people by injecting one-sided politics into their programming decisions. And apparently Patriots fans hate them even more for their treatment of Brady. Somewhere along the line maybe ESPN will learn that actions have consequences, and if you're a sports channel, maybe pissing off sports fans isn't the best business model.

The whole exchange, along with hilarious reactions from other Tweeters, can be found here.