Our morning demo involved how police face off with an armed, uncooperative individual. One of the things they demonstrated was how quickly someone with a knife can cover the ground between themselves and an officer (very quickly), giving the officer precious little time to draw their weapon before the attacker is upon them.


Long Gun: Live Fire
Instructors:
Back at the range! Today I got to fire an AR-15, which is not an AK-47, but looks similar and a lot of people lump them in together. According to the instructors, these are apples and oranges in terms of firepower. I still wouldn't want to be shot with one.

I forgot to mention it in my previous post, but while learning to take aim I discovered that while I'm right-handed, I'm left eye dominant. Also on both days, the casings were flying all over the place as they were being ejected from the guns. Several of them bounced off of me. 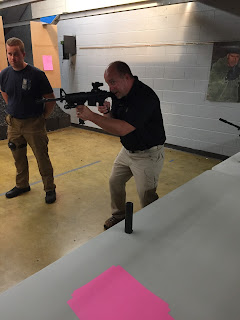 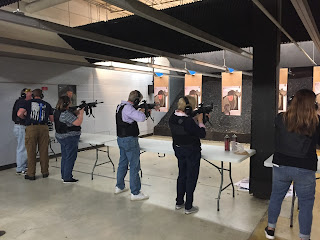 Cordite, Perps and Badge Bunnies: Everything You Thought You Knew About Cops
Instructor: Lee Lofland


Here is a list of no-no's for crime writers:

And some sobering bad news: We have already surpassed the number of cops killed in the line of duty last year, and it's only August.

Dr. Ramsland co-authored Dennis Rader's "guided autobiography" and had much to say about dealing with serial killers, much of it not terribly flattering to some other writers and reporters who have done the same. Mainly she felt that they gave their subjects too much freedom (like calling whenever they felt like it) and that strict boundaries need to be set.

She seemed pretty dismissive of Rader, the BTK serial killer who murdered ten people. She admitted to letting him think he was "playing" her during the writing of the book and also had to "bracket" what she thought of him during the process. Now that the book is done, she feels that she can judge him. She said that he sees himself as a James Bond/spy type. I don't remember if she actually used the term "delusions of grandeur" but if not, it still came across. She described the book as 85% Rader and the rest was her setting things up and giving them context.


And that, sadly, is the end of my WPA 2017 experience. Due to an extreme lack of sleep I was exhausted, so I not only skipped the banquet Saturday evening, but slept in the next day and had to miss the Debriefing and get to the airport. On the bright side, planning has already begun for WPA 2018, which will be its 10th anniversary, and based on my experience they will really knock it out of the park to celebrate.