Handgun: Live Fire
Instructors: Walters/Haines (I didn't get their first names - sorry guys, you were amazing!

So I finally got to fire a gun!

I actually got to shoot twice, once on Friday and again on Saturday. Friday was handguns - 9mm to be exact - and good God do they pack a punch. From now on, when I see a movie or TV show that has a character firing this gun one-handed, it's going to take me out of the story. Maybe a big guy, but not a small guy and definitely not a woman, not unless their shots are wildly off-target. I kept thinking about what it must be like to be on the receiving end of those bullets, and wondering how anyone survives it. Big bullets and serious firepower. 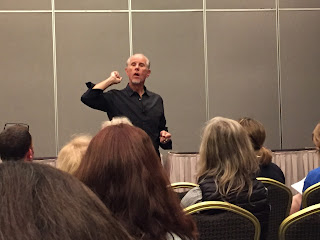 Paul Bishop is a veteran of the Los Angeles Police Department (primarily sex crimes), a published author, and even appeared on a reality television show. The man is also world-class when it comes to interrogation techniques and detecting deceptive behaviors.

Bishop covered a lot of ground during this session. I took about eight pages of notes. If you get the chance to see him speak, do it.