Submitted for your approval - February-April edition

Due to my Mom's death, March and April submissions kind of went off the rails, then I forgot to post this altogether. Nor did I get around to posting what I'd done in February, so here's everything from February through April:

Writer's Digest "Your Story Competition": February's contest was a caption contest for this photo: 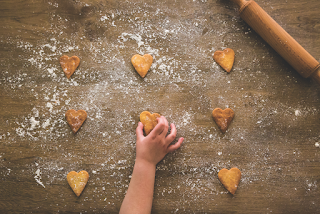 Of course my mind went straight to crime, so the caption I submitted was, "I double-counted my poisonous treats, one for every time he'd broken my heart."

I wasn't quite sure if I wanted to submit it, because I couldn't tell for sure if the hand in the picture belonged to a child or just someone pudgy. I decided to go with the latter because if I'm confused about it, other contributors probably are too.

I also got a submission in during March for another anthology. The short story involved is the one I talked about here. It ended up being one of my twice in one day rejections. The other one was for the quarterly ezine mentioned here.

On the bright side, as I mentioned here, my now-aged Better Call Saul script did well in the latest Scriptapalooza competition.

On the downside, I found out that the short stories I submitted for two upcoming anthologies (Mystery Writers of America and Bouchercon) were not selected. Either one would have been a career moment. I really liked both stories too, will need to try and find other places to submit them.

The MWA anthology had almost two hundred entries and chose ten. Bouchercon had about 300 and the "wish we had better news" email I got raved about the quality of all of them and how hard it was for the judges to pick just a few, so I'm trying not to feel too bad, but just one of those would have been huge.