I'm officially become addicted to listening to audio books in the car, and they were a huge part of my recent reading.

The Drop by Michael Connelly 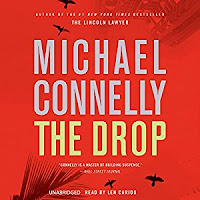 Note: This was the audio book version read by Len Cariou.

The Drop is the 15th book in the Harry Bosch series and it finds him on the verge of retirement. At LAPD, DROP refers to their Deferred Retirement Option Plan, which gives detectives who have reached the department's mandatory retirement age the option of being kept on for an additional five years, assuming their request is approved by the department, and of course Bosch wants to stay on the job, doing what he does best.

Bosch has been assigned to the LAPD's Cold Case division, where he is handed an old case with a potentially problematic issue concerning blood evidence results that have just come in from the lab. But before he can get going on it, he's also ordered to investigate to the death of George Irving, the son of his nemesis, Irvin Irving, who either leapt from or was pushed off the balcony of his room at the Chateau Marmont.

Despite the differences of the cases and the people involved (one high profile, one anonymous) Connelly and Bosch manage both skillfully. The Irving case is in the spotlight, with both the former chief and his son having a lot of history and clout with both the LAPD and local politics. The cold case, on the other hand, has no high profile players, but earns Bosch's equal attention and expertise, as is typical of Connelly's venerable hero. In addition, Cariou's reading was terrific and although Titus Welliver, who currently portrays Bosch in the Amazon series is now the voice of the audiobooks, Cariou's voice rang true.

"The update is that we're waiting on the autopsy. There was nothing about the physical scene that leads us to any final conclusion. We have pretty much eliminated accidental death. It's going to go suicide or murder, and my money at the moment is on suicide."


The Love You Make: An Insider's Story of The Beatles by Peter Brown and Steven Gaines 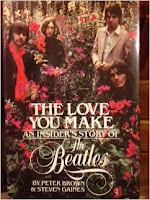 Brown was a member of The Beatles inner circle going back to their origins in Liverpool and this is very much an insider's story, starting with John Lennon's troubled childhood, then proceeding to his musical partnership with Paul McCartney, George Harrison and eventually Ringo Starr. A big part of the story focuses on the band's manager, Brian Epstein, whose hard work and belief in them (along with his besotted obsession with Lennon) practically willed the group into stardom while his self-destructive behavior left him tortured and led to his premature death.

There's a lot of info about what went on behind the scenes and belies the lovable, wholesome mop-top image created for the group and perpetuated - at least for a while - by the Beatles themselves. Drugs, paternity suits, infidelity, Lennon's often vicious tongue and treatment of others - including his wife Cynthia and Epstein - are all unflinchingly exposed. But their talent was undeniable and Epstein worked them and himself mercilessly until Beatlemania was born. Just reading about their touring schedules was exhausting; it's understandable why, despite Epstein's protests, they eventually decided to quit touring at the height of their popularity.

The book also takes a brutally honest look at how George and Ringo were often treated as "lesser" Beatles, as well as the ups and downs of the group's post-breakup lives, works, finances, spiritual pursuits, and relationships with each other and the women in their lives. The book was published in 1983, was being written when Lennon was shot to death in 1980, and ends with that tragic event.

If there was anything disappointing about the book (besides some of the warts-and-all reveals) it was the absence of any mention of Freda Kelly, the longtime Beatles fan club secretary who was profiled in the terrific 2013 documentary Good Ol' Freda. I loved the film and was hoping for at least a mention of her.

John wore his new mantle of fame most uneasily. While Paul and George could bask in the adulation, and Ringo seemed only happily bewildered, John felt slightly betrayed by it all. Here he was the rebel, the iconoclast, who had become a plaster icon himself. John was being singled out as the great intellect because of his wit and easy verbal facility in press conferences and interviews. Suddenly, all the wise-ass, mean-tempered humor he had exhibited as a youth that had gotten him into so much trouble was being interpreted as wit. It became, in a way, more difficult to insult people who didn't know him, because he sounded so pithy and bright. 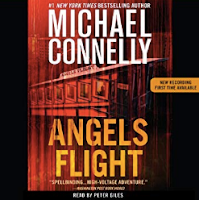 Another Connelly audiobook, this one read by Peter Giles.

There's no shortage of problems with the case. While one victim is a simple maid, the other is Howard Elias, a local African-American lawyer famous for suing the crap out of the LAPD and its officers for police brutality on behalf of black defendants. With the 1992 L.A. riots still fresh in the minds of Angelenos, the big fear is that Elias may have been murdered by a cop and the case will set off a fresh wave of violence and destruction. The fact that any number of cops had motive to want Elias dead puts Bosch in the position of having to investigate his own. The usual department politics, always a thorn in Bosch's side, just add insult to injury. And in addition to dealing with the high-profile and potentially explosive case, Bosch is also grappling with the deterioration of his marriage.

Fun fact: Angels Flight is comprised of two railcars named Olivet and Sinai. In the novel, the murders occur aboard Olivet. Another fun fact: I donated the audiobook to my local thrift shop as soon as I was done but before I could snag a quote.

I think this is where the audio book addiction officially kicked in. After finishing Angels Flight, music just wasn't cutting it.

This is the most recent Harry Bosch novel and was read by Titus Welliver, who plays Bosch on the Amazon TV series of the same name and is now the voice of his audiobooks. Bosch, now unceremoniously retired from the LAPD, is donating his talents to the San Fernando Police Department's cold case files when he's enlisted to help SFPD investigate a double-murder at a local pharmacy that leads to a prescription drug scam that leads to a seriously dangerous undercover job.

And being retired doesn't mean the LAPD is going to leave Bosch in peace. Just before getting the call for the murders, he's informed that his former department has found a discrepancy in an old case of his that sent a trust-funded aspiring actor to death row, and that the guy may now be in a position to sue the department, the city of Los Angeles, and Bosch himself for wrongful imprisonment. The inference that Bosch - who is certain he got the right guy - may have tampered with or withheld evidence means that as usual, he's working multiple cases: the current pharmacy murders, the old death row case in order to clear his name and reputation, plus an old cold case file that has an unexpected resolution.

To add to the fun, Mickey Haller, Bosch's half-brother (aka The Lincoln Lawyer) makes an appearance, helping Bosch clear his name in the old case. His cool as a cucumber courtroom machinations are dazzling.

He knew there were two kinds of truth in this world. The truth that was the unalterable bedrock of one's life and mission. And the other malleable truth of politicians, corrupt lawyers, and their clients, bent and molded to serve whatever purpose was at hand.


The Garden on Sunset: A Novel of Golden-Era Hollywood (Hollywood's Garden of Allah Novels, Book 1) by Martin Turnbull

I'd been aware of Turnbull's Old Hollywood novels, but had never read one. Earlier this month he announced the upcoming ninth and final release of the series. A few days later I was at the salon looking for something to read and realized I had the first of the novels on my Kindle, and I was off and running.

Just as the first talkie, The Jazz Singer, has been released on an unsuspecting public, three young hopefuls descend on The Garden of Allah Hotel on Sunset Boulevard, formerly the palatial home of silent film star Alla Nazimova. There's film-crazy Marcus Adler, a would-be writer who arrives at The Garden after being unceremoniously booted from his home and hometown in Pennsylvania by his father, who has discovered Marcus is gay. Spirited Kathryn Massey's mother has spent years pushing her to be an actress, but Kathryn wants to be a reporter. Then there's Southern beauty and aspiring star Gwendolyn Brick, who has just relocated to Hollywood, California from Hollywood, Florida. The three become fast friends and the tale covers their struggles to fulfill their dreams while rubbing shoulders with the historic, rich, famous, and influential in Tinseltown including Errol Flynn, Tallulah Bankhead, Marion Davies, Fred Astaire, Ginger Rogers, George Cukor, Louella Parsons, Ramon Novarro, Dorothy Parker, and the mysterious Nazimova herself. By the end of the book, they haven't quite achieved their desires, but are well on their way.

The characters are well-rounded and appealing; you can't help root for them. I'm looking forward to seeing their progress in the subsequent novels. And Turnbull knows old Hollywood inside out. Reading this is like taking a time-machine back to the early days when Hollywood wasn't quite yet fully-formed, but well on its way. And since time machines haven't been invented yet, this novel is the next best thing.

As he poured them both a scotch, she scanned the crown for that Earl O'Flynn fellow. It was always easy to spot the stars. There was something magnetic about the big ones that set them apart: Douglas Fairbanks, Mae West, Gary Cooper. But it was more than good looks. Bela Lugosi was no great looker, but when he came in to the Cocoanut Grove one night, he stopped bystanders in their tracks. Even from across the pool, Gwendolyn could sense that Earl O'Flynn had it.
(Note: In case you didn't twig to it, "Earl O'Flynn" was actually Errol Flynn)