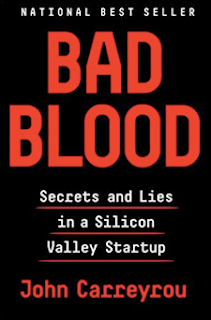 Bad Blood: Secrets and Lies in a Silicon Valley Startup by John Carreyrou

This is the book that inspired the HBO documentary The Inventor: Out for Blood in Silicon Valley.

I had never heard of Elizabeth Holmes or the Theranos scandal until recently when HBO started airing the documentary. I watched it and was riveted. I think I've probably watched it half a dozen times so far, and will watch it another half dozen more at least. It's one of those "you can't make this up" kind of stories, all the more boggling because it's real.

John Carreyrou is a Wall Street Journal investigative reporter who got a tip that neither Theranos nor Holmes were what they claimed to be, and his dogged investigation and reporting is what finally toppled the company, revealing shocking and blatant fraud, lies, and deception.

Holmes dropped out of Stanford at the age of nineteen and started a company that she envisioned developing a method of running diagnostic blood tests with just a finger prick of blood, rather than the vials of blood that normally have to be taken via needle. A key part was not just the simplicity of drawing just a small amount of blood with a minimum of pain and invasion, but also of having the test run on machines of Theranos's design, which would test for any number of issues. Her ultimate goal was to put personal health care in the hands of the consumer, making it easy for them to give a small amount of blood and quickly receive results from a machine about the size of a home printer, rather than being at the mercy of the medical field and expensive labs. Holmes' ultimate goal was that Theranos technology would become as common in homes as Apple products. Which would have been great if it was possible.

For a variety of scientific and technological reasons, it's not.

Nonetheless, over the years Holmes was able to sell some of the most famous, successful people in science, business, academics, and politics on the concept, raking in hundreds of millions of dollars in investments in the process. In particular, she had a gift for holding older, successful, and influential men in her thrall. There's no sign that she ever offered herself up for favors, but she still managed to cast a spell over them.

Theranos's board boasted some huge names, including George Schultz, who had served under Presidents Reagan and Nixon and like a number of board members was a distinguished fellow at the Stanford think tank the Hoover Institute, former Secretary of State Henry Kissinger, General James Mattis (giving credence to Holmes's frequent selling point that the U.S. military was already using Theranos technology in the battlefield - a blatant lie), Rupert Murdoch, the Walton family, as well as a number of other prominent investors and other members of the Washington elite, including President Barack Obama. Holmes made appearances for Hillary Clinton on the presidential campaign trail and enlisted Chelsea Clinton as a friend. Vice President Joe Biden made an appearance at the Theranos facility in Palo Alto, California, and lavished praise on Elizabeth and her work.

There was also the appeal of Holmes as the first Silicon Valley billionaire female founder. Other women such as Marissa Mayer of Yahoo and Sheryl Sandberg of Facebook had achieved great success in Silicon Valley, but they didn't found their companies. Holmes was the first and a lot of people were blinded to her faults at least partly because they wanted a female Steve Jobs, who Holmes would eventually pattern herself after, right down to adopting his iconic black turtleneck as her "uniform".

The problem wasn't that Theranos was trying to develop the technology to make Holmes's vision a reality, it was that even as it was attempting to do that - and failing miserably - Holmes insisted on selling it as if it was already developed and ready for implementation, signing multi-million dollar contracts for "wellness centers" with Walgreen's and Safeway, and trying to secretively provide the services before Theranos could deliver what it claimed it could. In fact, because its own diagnostic machines were faulty, the company quietly bought a number of commercial machines to run the tests. None of this was disclosed to customers. In addition, the finger prick method of drawing blood didn't provide the volume of blood necessary to run the tests accurately, so Theranos's labs would excessively dilute the samples in order to give them enough material to work with, but which often rendered the results dangerously inaccurate.

Although Holmes started the company on her own, she eventually enlisted a partner in crime - Ramesh "Sunny" Balwani, who became both her boyfriend and second in command. It was a relationship she kept from the board and investors, but it wasn't all that was kept hidden. Security at Theranos was obsessive and paranoid. Holmes had bodyguards and there was bulletproof glass and military-level security teams at the company headquarters. Visits to the facility by both investors and investigators were carefully choreographed, as were faked demonstrations of the Theranos blood-testing machines. Large portions of the lab were only accessible to certain employees and visitors were kept away, usually with the excuse that Theranos was concerned that their "trade secrets" needed to be protected.

Sunny was a bully and a tyrant, Elizabeth was unreceptive to any employee who tried to bring problems to her attention, and as a result turnover at Theranos was high and frequent. The sheer inaccuracy of the blood tests was upsetting for Theranos employees, who were traumatized at the disservice being done to patients. Neither Holmes nor Balwani seemed to care; even as Theranos scrambled to deliver results while hiding the fact that they had to do it on commercial machines from other companies, the two continued to barge ahead and enlist ever more big name, deep-pocketed investors and to sell Theranos technology as something that was ready to deliver. Even the financial forecasts provided to potential investors were works of fiction, but between the Holmes aura and the impressive names on the Theranos board, no one ever considered the possibility that they were being intentionally misled about the company's technology and prospects.

Another bullying tactic the company used was forcing employees - current and former - to sign draconian non-disclosure agreements. In fact, Theranos employees weren't even supposed to discuss their work with family members. They also enlisted a major law firm to hound former employees, threatening to sue if they disclosed anything about the company, its technology, and presumably its less than stellar practices. One employee, Cambridge-educated Ian Gibbons, became so distraught over his experience with the company and being called to give a deposition that could have cost Holmes and Theranos some patents (and feeling that it would cost him the ability to find another job) that he committed suicide. Theranos's response to his death was to request that his widow return his company laptop and cell phone.

I think part of my fascination with this story is that I have a sister who - like Elizabeth Holmes - I'm pretty sure could be diagnosed as a sociopath. It's boggling to watch someone not just fudge the truth, but look people in the eye and just completely fictionalize things without the slightest hesitation or distress that would affect a normal person. Because that's what Elizabeth Holmes did. In fact, even after Carreyrou's initial article started the ball rolling on the crash and burn of Theranos, Holmes did interviews in which she flat-out lied in order to deny the charges raised in the articles about her company's practices and ability to provide the services they were selling.

I have to wonder how long Holmes would have been able to continue this charade if Carreyrou hadn't written his article. There seemed to be no limit to her ability to mesmerize investors and audiences, and bully anyone who challenged her, and even after being exposed has so far refused to admit any wrongdoing, even after Theranos paid out millions in damages and penalties. It's as if she genuinely doesn't think she did anything wrong, and that's flabbergasting.

In addition to the HBO documentary, there is also going to be a Bad Blood movie. It was recently announced that Holmes will be played by Jennifer Lawrence, and once you've seen Holmes in action it's great casting. Vanessa Taylor (Oscar-nominated for The Shape of Water) is writing the script. Gotta admit, as much as rarely as I see a first-run movie in theaters these days, I'll be first in line for this one. There's also a great podcast called The Dropout that covers the Holmes/Theranos story.

When Friday arrived, I tried to check in with Dr. Stewart several times in the morning but couldn't reach her. She called back in the early evening, as I was driving out to eastern Long Island for the weekend with my wife and three kids. She sounded rattled. She told me Balwani had tried to make her sign a statement similar to the one her colleagues had signed, but she had politely refused. Furious, he had threatened to drag her reputation through the mud if she appeared in any Journal article about Theranos. Her voice trembling, she pleaded with me to no longer use her name. As I tried to reassure her that it was an empty threat, it dawned on me that there was nothing these people would stop at to make my story go away.