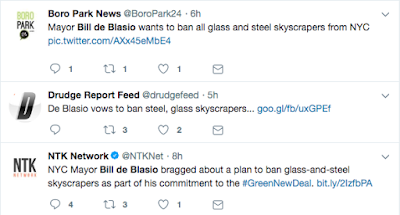 These kind of tweets started popping up this morning and I really thought this was going to be one of those instances when a story went viral because people thought it was real, only to discover it was a spoof. After all, today is "Earth Day". I figured it was an April Fool's-type joke.

It wasn't. He's dead serious. From the linked article:

"We're going to ban the classic glass and steel skyscrapers, which are incredibly inefficient. If someone wants to build one of those things they can take a whole lot of steps to make it energy efficient, but we're not going to allow what we used to see in the past."

And anyone who doesn't fall into line is going to pay big time. Because, you know, New York isn't already prohibitively expensive:

"If you don't do it by 2030 there will be serious fines, as high as $1 million or more for the biggest buildings."

Of course, with De Blasio being a holier-than-thou and not-at-all hypocritical politician who cares about Mother Earth and would never do anything to harm her (as he sticks it to people he thinks are doing just that) I have to say seeing this next part of the article prompted my not surprised face:

In the same conversation that he was touting renewable energy and reducing emissions, de Blasio also defended his use of a gas-guzzling SUV for his daily 11-mile trips from Gracie Mansion to his Brooklyn gym.

Of course he did. Powerful people always exempt themselves from the rules and restrictions they inflict on the peons. Remember when Obamacare was passed? Remember who was exempt from it? If you answered the President whose name it bore and the Congress critters who foisted it on the little people, you get a cookie.

Shameless entitled hypocrites, all of them.

Posted by Melinda at 5:03 PM
Labels: Famous Idiots, In the News, Jerks, State of the Union, Twitter