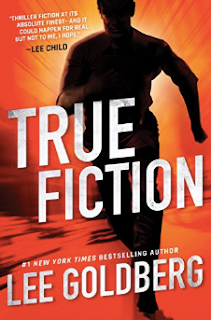 True Fiction is the first of Goldberg's Ian Ludlow novels (the second, Killer Thriller, was released in February). Ludlow is a pudgy, mild-mannered writer who has to become his slick, fictional super-spy to survive after a strangely familiar terrorist attack has him running for his life.

Ludlow is promoting his latest novel when there's a 9/11-type attack on a Waikiki hotel. His shock and horror when he hears of the event is different than most people's because the attack was his idea. Some time earlier Ludlow and several other writers were approached by a CIA agent who enlisted them to brainstorm possible terrorist attack scenarios, and Ludlow recognizes the Waikiki attack as one he contributed. When he discovers that all the other writers involved have recently died, he realizes he's next on the hit list and goes on the run with Margo French, a young woman who was assigned to escort him to his author appearances and is reluctantly swept up in his predicament.

Ludlow heads to rural Nevada to enlist the aid of Ronnie Mancuso, previously an actor on a show Ludlow wrote for who has become a survivalist. Mancuso may seem nutty, but his paranoid and bizarre preparations for the end of civilization as we know it (along with Ludlow's mental transformation into his protagonist) come in very handy in helping them stay one step ahead of their well-equipped pursuers.

Goldberg has a wicked sense of humor that makes the action fun as well as edge-of-your-seat exciting. And it made me beyond happy that one of Mancuso's old acting credits was Frankencop from Goldberg's novel My Gun Has Bullets. I felt like I'd somehow come full circle.

True Fiction is just a really terrific book and I'm looking forward to reading the next Ludlow story. In addition, Goldberg mentioned today on social media that he's putting the finishing touches on the third installment in the series, so there will be even more to look forward to.

"Hell yes. Winter is coming." Ronnie came back to the Mustang, grabbed the RPG launcher off the hood, and headed out into the field toward some boulders.

"He is batshit crazy," Margo said.

Ian disagreed. He trusted what his heart was telling him. He was a fool to think he'd outsmarted the CIA. The only thing that had kept them alive this long was pure, dumb luck and it may have just run out.