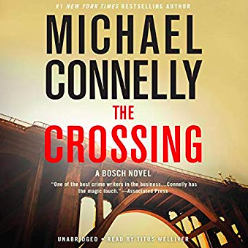 The Crossing by Michael Connelly (audiobook read by Titus Welliver)

Harry Bosch is now retired from the LAPD and working as a private investigator. He gets a call from his defense attorney half-brother Mickey Haller (aka The Lincoln Lawyer) to lend his skills to a case Haller has taken on, that of a supposedly reformed gangbanger who has been arrested for the vicious murder of a West Hollywood Assistant City Manager...who also happens to be the wife of an L.A. County Sheriff's Deputy.

Bosch is reluctant to get involved. The book's title refers not just to law enforcement's attempt to link the accused to the victim, to try and find the point where their paths crossed, but also the idea of a former cop working to help a defense attorney and the accused - i.e., crossing over to the other side of the equation, the dark side. But the possibility that Haller's client may be innocent means the real killer is loose and isn't being pursued, and that's not a possibility Bosch can just walk away from.

Despite overwhelming evidence against the accused, Bosch eventually signs on, mainly because he's become convinced that there is evidence that was overlooked. In particular he locks in on a missing, extremely expensive watch owned by the victim, a gift from her husband. What seems like a simple if senseless murder explodes into a tale of blackmail, extortion, prostitution, more murder, and two extremely bent vice cops. And while early on I felt like the fixation on the watch was pointless and almost annoying, Connelly of course spun it into the piece of evidence that helps Bosch crack the case wide open.

I did have one serious quibble: at one point Bosch, concerned that someone may be lying in wait for him when he returns home, makes a point of clearing every room of his house with his weapon drawn, then sets it down and goes out onto his deck without bothering to clear that area, and of course that's where the bad guy is waiting for him. I just don't see Harry failing to clear every part of his home. But overall, this just became one of my favorite Bosch stories. The intricate plot played out beyond what I expected and the bad guys in this one - the vice cops - are truly terrifying.

Bosch stood at the door, listening to the steps as Cornell and Schmidt walked away. He could feel his face burning red with humiliation. If they had checked him out it meant that everybody in the LAPD would know that he had crossed to the dark side. It would not matter to them that Bosch actually believed there was a good chance that the man accused of the crime was innocent. The bottom line would be that Bosch was now a defense investigator.