"Harvey" at the Laguna Playhouse 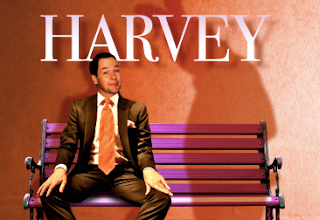 About nine months after purchasing my ticket, I finally got to behold the wonder of Mary Chase's "Harvey" on stage last weekend at the historic Laguna Playhouse, with French Stewart in the James Stewart role. At least that was the idea.

"Harvey" premiered on Broadway in 1944 and resulted in a Pulitzer for Chase, a four year stage run, and an endearing classic film. Here is the synopsis from the play's Wikipedia page:


Elwood P. Dowd is an affable man who claims to have an unseen (and presumably imaginary) friend Harvey — whom Elwood describes as a six-foot, three-and-one-half-inch (192 cm) tall pooka resembling an anthropomorphic rabbit. Elwood introduces Harvey to everyone he meets. His social-climbing sister, Veta, increasingly finds his eccentric behavior embarrassing. She decides to have him committed to a sanitarium.
When they arrive at the sanitarium, a comedy of errors ensues. The young Dr. Sanderson mistakenly commits Veta instead of Elwood, but when the truth comes out, the search is on for Elwood and his invisible companion. When Elwood shows up at the sanitarium looking for his lost friend Harvey, it seems that the mild-mannered Elwood's delusion has had a strange influence on the staff, including sanitarium director Dr. Chumley.
Only just before Elwood is to be given an injection that will make him into a "perfectly normal human being, and you know what bastards they are!" (in the words of a taxi cab driver who has become involved in the proceedings) does Veta realize that she would rather have Elwood the same as he has always been — carefree and kind — even if it means living with Harvey. But the only reason Veta hears from the cab driver is that she can't find her coin purse and has to get the cab fare from Elwood. That is when the cab driver sees what is happening and goes into his spiel. Later Veta realizes that the purse was there all along, but Harvey hid it from her.

As a longtime fan of the film version, I was so looking forward to seeing "Harvey" onstage, but it just didn't meet my expectations. So at the risk of being a Debbie Downer, here are my gripes:

But apparently I'm in the minority here, because the reviews I found online praised the production and raved about French Stewart's rendering of Elwood Dowd. Go figure. It just didn't do it for me.

There were three things that I did get a kick out of: First, in addition to Mongiardo-Cooper, I also loved Teresa Ganzel in the potentially thankless role of the ditzy Mrs. Chumley. I thought she was delightful. Next was discovering via the program that Carole Ita White, who played Mrs. Chauvenet, is the daughter of Jessie White, who played Wilson in both the original Broadway production as well as in the film version. Finally, when the cast came out to take their bows, Harvey was included. The door of Dr. Chumley's office opened to admit him to the stage, he took his applause, and the cast left a spot open for him when they took their final bows.

But it says something about the production that the high point of the show is when it has just ended. I'm glad I saw it because I would have felt like I'd missed out if I hadn't. But it wasn't what I was expecting or hoping for. But I would be open to seeing another staging of "Harvey", if for not other reason than to see how it would compare to the classic film and my expectations, especially since reading the play didn't prepare me for a staged version that differed greatly from the movie.

Posted by Melinda at 12:19 AM
Labels: Film, Historic Hollywood, Theatre