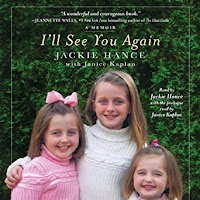 A couple years ago I stumbled across the horrific but compelling 2011 HBO documentary There's Something Wrong with Aunt Diane. It dealt with a deadly July 2009 car accident on the Taconic State Parkway in New York State that killed driver Diane Schuler and four of the five children in her mini-van (her two-year old daughter and her three nieces) along with all three men in the vehicle Schuler struck. The only survivor was Schuler's five year old son Bryan. In terms of fatalities it was the worst accident in New York State since 1934.

The accident was caused when Schuler entered the Taconic via an offramp, going the wrong way (southbound in the northbound lanes) at high speed for almost two miles before striking the vehicle carrying father and son Michael Bastardi (aged 81) and Guy Bastardi (aged 49) and their friend Daniel Longo (aged 74).

Author Jackie Hance is married to Schuler's brother Warren Hance, and the three nieces were their daughters: Emma, aged nine, Allyson, aged eight, and Katie, aged five. The girls had joined Aunt Diane, her husband Danny (who drove home separately), and their two young cousins for a weekend camping trip. At some point during the drive home Emma called her parents, frightened and crying, and told them that there was something wrong with her aunt and that she was driving erratically. When Diane got on the phone her speech was slurred and Jackie and Warren feared she had suffered either a seizure or a stroke. She was supposedly at a rest stop and Warren told her to stay put, that he would come to them. Not only did she keep going, she also abandoned her cell phone, meaning that she and her vulnerable passengers couldn't be contacted or tracked.

Diane was a supermom, dedicated and trustworthy. Her survivors assumed she had been disoriented due to some sort of medical episode and the accident was initially viewed simply as a terrible tragedy. Then the results of Diane's autopsy was released and everything changed: she had a blood alcohol content of .19 (double the New York legal limit) and also had marijuana in her system. Suddenly the accident was considered anything but and Diane became one of the most hated women in America, the despised drunk-driving mom who killed eight people.

I don't remember hearing about the accident or the media attention that followed it at the time. Maybe because it was on the other side of the continent, although it received quite a bit of national coverage. But I can see why it generated such interest and emotional responses. It's an epic tragedy.

Of the four families impacted by the wreck only the Hance's declined to participate in the documentary. The title in particular galled them, having come from their terrified child. While I think the film is well-done I can understand why they didn't want any part of it. Their grief was unfathomable - all of their children dead, and at the hands of a family member they had loved and trusted. Then there was the constant media coverage, which they hated and only added to their misery. They weren't about to invite cameras into their lives.

Without the Hances, the film focused on Diane and her background (her mother abandoned the family when Diane and her brothers were kids, Diane was an overachiever and perfectionist) and Danny Schuler's refusal to accept the results of the autopsy and therefore Diane's culpability in the carnage, with a big assist from his sister-in-law Jay Schuler, married to his brother Jimmy. Diane was the model of a dedicated, hard-working wife and mom, so the results of the autopsy were tough for those who knew and loved her to accept. But Danny and Jay take it to another level and in doing so stubbornly refuse to accept reality, constantly looking for other imaginary reasons that would have triggered Diane's uncharacteristic behavior despite being repeatedly told that even a medical event (of which no evidence was found in the autopsy) wouldn't explain the alcohol and marijuana findings. In doing so, they also compound the damage done to the other families. You will hate Danny Schuler by the end of this film.

Because of the Hance's absence in the documentary, I was interested in hearing their side of the story. I had read online that they had eventually had another daughter and seemed to have triumphed over their misfortune and I wanted to know how someone could overcome such an overwhelming loss. It wasn't what I expected.

Jackie Hance had the perfect suburban wife and mom life. Her days revolved around her children. Summer camp, gymnastics, play rehearsals, soccer games, birthday parties, holidays, her schedule was her children's busy schedule and she loved it. And suddenly it was gone through no fault of hers, although she often unnecessarily worried that she hadn't done enough to protect her girls.

It would take over two years and the arrival of a new baby to finally push Jackie to a point where she could allow herself to be happy and look to the future without feeling guilty that she was being disloyal to Emma, Aly and Katie. She also had to deal with her conflicting feelings about Diane, who she had loved and trusted, and her constant thoughts of suicide. Despite being Catholic (for whom suicide is a mortal sin that will prevent you from entering the Kingdom of Heaven) she still often entertained the thought because of her desperate desire to be with her daughters.

Just a warning - if you decide to read the book, you may (like me, God help me) reach a point where you begin to lose patience with Jackie after a while. I was expecting a story of how she and Warren banded together to fight the devastation of their loss, but she lashed out at him time and time again, partly because it was his sister who inflicted this tragedy on them, and also because, as Jackie eventually comes to terms with, they grieved and dealt with their loss differently. If you do get to that point, my advice is to stick with it until the end. Jackie does eventually emerge from her darkness to finally reach a place where she can move forward into the future and allow herself some much deserved happiness, with a big assist to Warren (who deserves sainthood for what he went through) and a close-knit, dedicated network of friends who went above and beyond to support the couple.

Another warning, if you buy the audiobook - I didn't notice this when I ordered it, but it's read by Jackie herself. When I realized this I was almost afraid to listen to it, not sure I could bear hearing this horrific story from the woman who had to live it. But Jackie reads with a stoicism that betrays none of the overwhelming emotions she experienced and then had to relive during the writing and recording of the book. By the time it was finished I was glad I'd listened and got to hear this part of the story that didn't make it into the film from Jackie herself. Despite the dark days, it's ultimately a story of love and survival.

Highly recommended, but damn it's tough to look at those three innocent, beautiful girls on the cover, especially since next month will be the tenth anniversary of the crash.

Then I saw Brad on his cell phone and I heard him say, "Warren?" Fear and concern resonated in Brad's voice, as if the person he was talking to on the other end was hysterical.

In the frenzy of the last couple hours time had sped by, but now it came to a grinding halt. My eyes were fixed on Brad and all the buzz around me seemed to stop. As he listened to Warren try to give the full report, Brad stood straight, then slumped against the wall. I saw him drop his head once, twice, three times. The wall could barely hold him up. Then he put down the phone and came over to me. His face looked stricken.