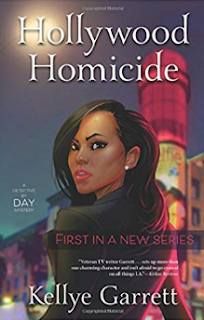 Garrett's debut novel scored a slew of Best First Novel awards, including the Anthony and Agatha, and I can see why.

Dayna Anderson is a failed actress who has accepted her fate and gracefully retired from the biz, after her one big break as the tagline spouting face in a series of commercials for a chicken restaurant chain ended and didn't result her career taking off. To her credit she's not bitter, despite now being broke from lack of work and partially dependent on a couple of financially better off friends. Unfortunately her parents are also not doing well, resulting in foreclosure threats. Dayna had given them the last of her savings, but when the calls continue, she stumbles on a decidedly unconventional way to score some bucks.

She's pouring her last few dollars into her gas tank when she spots a billboard offering a $15,000 reward for information leading to the arrest of a hit and run driver who had killed a young woman nearby. Dayna realizes that the night of the accident, she and several friends had driven by the scene and may have also caught a picture of the offending vehicle as it sped away, nearly t-boning their car. She decides she'll try to solve the crime and collect the reward money. Yep, that's her plan.

And off she goes, way in over her head, on an adventure that is both hilarious and dangerous as she accuses pretty much anyone with any connection to the victim of being the killer at one time or another, while juggling calls to the tip line every step of the way so that she can be sure to score the much-needed reward money. She has help in the form of her fashion and fame obsessed roommate, a friend who is a former child star turned obsessed computer wiz, a weird former cop doing his own investigation into the death, and an elusive love interest who has just scored a starring role on a CBS cop drama called LAPD 90036. (In case you're wondering, that zip code belongs to the area that includes The Grove, Park La Brea, and the stretch of Wilshire Boulevard between Fairfax and Highland).

Garrett uses her knowledge of the industry (she has an episode of Cold Case to her credit) to skewer it and its denizens, and she does it extremely well, but without cynicism or malice. Sparkling with a great sense of humor, Hollywood Homicide is a breezy and entertaining read. It's also the first of a series featuring Dayna; the second, Hollywood Ending, is being released this week and I'm looking forward to it. I won't be surprised if it turns out to be as much of an awards magnet as its predecessor.

And work me they did. I didn't have a spare moment all day except for lunch. When I called the tip line, I got voicemail. My theory was too good (and too long-winded) to leave after the beep, so I waited until I got off work at four, calling the Voice as soon as I got to the lobby. It took me all the way to Robertson to get my story out. "Did you at least write it down?" I asked the Voice.

"It's in your file, 1018. Right next to my notes about Montgomery Rose, BMW owner. Right next to you swearing up and down the killer was the boyfriend of a quote PrimaDonna6969. Right next to you letting us know a Marina Choi did her friend in. Your file is fatter than a contestant on Biggest Loser at the first weigh-in."