Last night I started watching a documentary called The Creepy Line, about how Facebook and Google collect information from their users and then use it for - and sometimes against - these same users. I haven't finished it yet, but what I have seen so far is mind-blowing. We're living in manipulative algorithm hell. You should see this movie.

Still, I thought it was kind of funny when this popped up on my FB today. One is an account I follow because I'm a fan of Better Call Saul, AMC's fantastic Breaking Bad prequel. The ad that followed it was "sponsored". 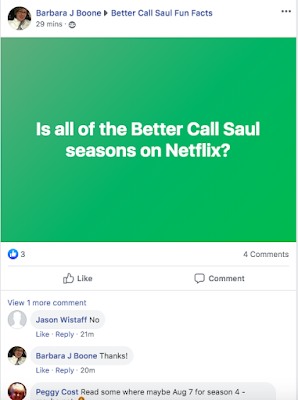 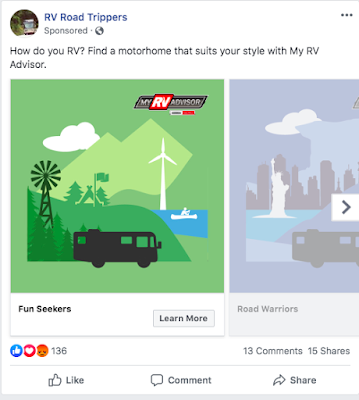 If you never watched Breaking Bad, the joke is that Walter White's first meth lab was a piece of shit RV, and White eventually became a client of sleazy lawyer Saul Goodman and ruined his life.

And LOL at Facebook. The algorithm gods giveth, and the algorithm gods taketh away. Debating whether or not to inform RV Road Trippers how they ended up on my feed. I also wonder what kind of money an account pays to get an ad sponsored. Because as much as I love watching Breaking Bad and Better Call Saul, I will never be in the market for an RV.

But just because their algorithm is shitty, I still don't want FB following me all about the web. Bastards.