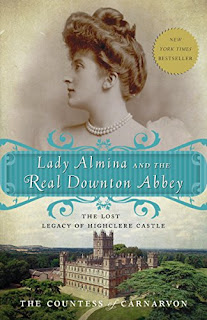 Lady Almina and the Real Downton Abbey: The Lost Legacy of Highclere Castle by The 8th Countess of Carnarvon

I've had this on the Kindle for a while and I'm not sure why it took me so long to get to it. What finally triggered it, strangely enough, wasn't the recent Downton Abbey movie but seeing the book when I went to the Huntington gift shop recently and realizing I needed to get to it.

The 8th and current Countess of Carnarvon tells the dazzling story of Almina Wombwell, the illegitimate daughter of wealthy banker Alfred de Rothschild, who married into life at Highclere Castle thanks to a combination of beauty, charm, and her father's money. She - like her TV counterpart - turned her gorgeous home into a hospital during World War I. I had no idea that her husband, the 5th Earl of Carnarvon, was part of the team that discovered the tomb of Tutankhamun. He was an amateur Egyptologist who also provided a lot of the financing for the archeological dig. The book is also an informative and fascinating look at Edwardian society and a lifestyle that no longer exists.

PBS has a special featuring the 8th (and current) Earl and Countess and despite their titles and lifestyle, they seem pretty low-key and down-to-earth, and very much appreciative of both the luxury and responsibility of living in a beloved castle. Based on this book, the Countess has made herself a scholar of her husband's family history and the magnificent property they live on. She has also written a book about Almina's successor Lady Catherine, who - like Downton's Cora Crawley - was an American who married into English nobility.

Perhaps it was in the field of medicine that Almina left the greatest legacy. She realised that post-operative and trauma care were as much a part of the healing process as the best surgical techniques and the latest equipment. Almina's understanding of the word 'care' was sincere. She realised that the nursing and physical environment at her Highclere hospital was going to make all the difference to the lives of the patients arriving from the horrors of the Western Front. Almina treated them as if they were country-house guests; nothing but the best food was served, with pastimes and recreation in the Castle State Rooms and park for those that were fit enough.