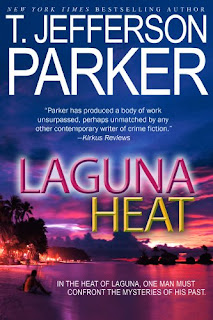 Laguna Heat was the debut novel of now three-time Edgar Award winner Parker. As dumb as it may sound, I downloaded it on Kindle after going to a play in Laguna Beach and driving up the coast through Laguna, Corona del Mar, and Newport Beach on the way home. Gorgeous drive. Plus, I've seen Parker a few times at the L.A. Times Festival of Books so I was overdue to check out his novels.

Laguna Beach native and homicide detective Tom Shephard is back on his home turf after a stint with LAPD that ended badly. He's faced with the burned corpse of a longtime resident that leads to secrets and crimes tracing back decades in the beach community and threatens to implicate a lot of prominent locals including Shephard's father, a former Laguna cop turned mega-church pastor. And that's after it's already become personal when Shephard's apartment is ransacked by someone who doesn't want him on the trail of the killer.

The plot is a bit complicated but Parker keeps it moving smoothly and I never felt bogged down by it. Terrific book and I'm looking forward to reading more of Parker's novels.

Later that night, as he studied the face of Azul Mercante in the pale light of his living room, Shephard could feel something foreign inside himself, a barely recognizable emotion, like an unwatered seed only now beginning to grow. He considered Mercante's haughty smile, the way he had forced himself into Shelphard's own home and tried to drag his mother down. Images flickered through his mind. Looking at the sketch, Shephard saw in the man everything he had learned to despise: arrogance, violence, recklessness, and a belief - most difficult of all for Shephard to understand - that everything is legitimized by one's own passion. He recognized the crude emotion growing inside him. It was rage.