Your feel-good story of the week, courtesy of the awesome University of Tennessee

A Florida teacher encouraged her fourth grade students to show support for their favorite college by wearing the school's gear and colors. One of her students was a University of Tennessee fan who didn't have any gear, so he stuck a hand-drawn UT logo to an orange t-shirt. Unfortunately not all of his classmates were impressed with his spirit or his handiwork. In fact, some of them made fun of his DIY show of support.

His teacher then took to Facebook in the hopes that someone could help the poor kid out. And that's when the University of Tennessee itself got into the act. Grab a Kleenex.

First they sent him a care package with UT swag. 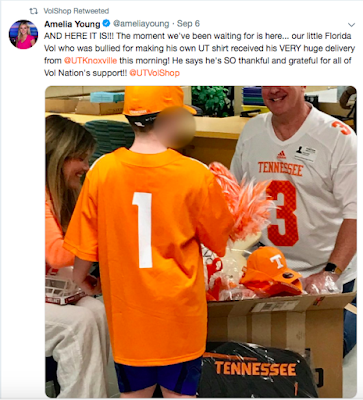 Then they created an official t-shirt with his design, with proceeds going to an anti-bullying organization. The shirts were so popular that the UT shop's website crashed due to the demand. 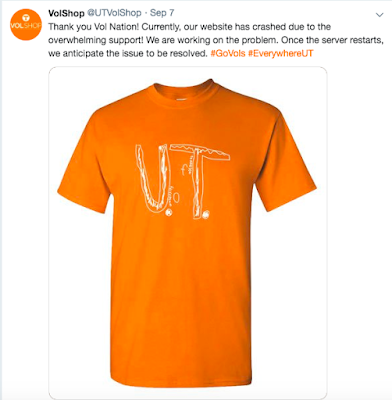 And because apparently that wasn't enough for them, the university has now done this: 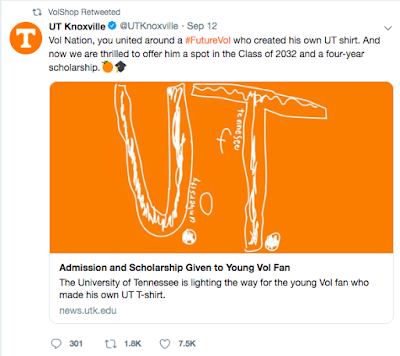 No joke. They're giving him admission to the school and a four-year scholarship. I can see why he's a fan. Sounds like the University of Tennessee is a first class organization. They could have just sent him the swag and it would have been a feel-good story. Now it's a life-changing story.

I hope the kid sells the movie and book rights for a bundle. Not that he'll need the money to pay for college, but his family has got to be inundated right now by producers and publishers.

I'm not going to bag on the kids who mocked him and I hope they aren't taking too much crap for their part in this story. Fourth graders are nine years old and not terribly mature or sophisticated. But I do hope that if they learn anything from this experience it's that even in a world that can be cynical and cruel, if you approach things in a way that is pure and humble, good things will happen.

Posted by Melinda at 8:14 AM
Labels: Cool Stuff, In the News