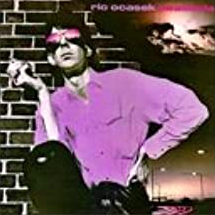 Just hopped online and saw the terrible news that Ric Ocasek of The Cars passed away today. He was 75.

The Cars were one of my favorite bands through the late 70's and 80's. If I had a personal soundtrack it would be littered with their songs, plus two of the songs off Ocasek's solo album Beatitude are also among my favorites.

In addition to their great music The Cars were known for their popular videos at a time when MTV and music videos were still a thing, as well as their stylized, iconic album covers.

I remember a while back, maybe earlier this year, realizing that I live in a world that no longer includes David Bowie, Tom Petty and Prince, and thinking how sad that was. That list now includes Ric Ocasek.

RIP sir, and thank you for all the wonderful songs.

Updated 9/16/19: Ocasek died in his sleep while recuperating from surgery.

Posted by Melinda at 7:51 PM
Labels: In the News, Music