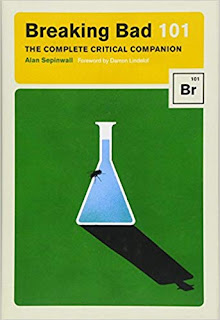 I had bought this book a while back but for some reason never got around to reading it. Given the release this weekend of El Camino: A Breaking Bad Movie (which triggered me into starting a new binge of Breaking Bad) I thought it was appropriate.

Sepinwall takes a psychological dive into the motivation behind Walter White's evolution from a mild-mannered and disrespected husband, father, and high school teacher to the drug lord known as Heisenberg, and the wreckage that journey left in its wake.

These aren't detailed recaps - you will need to have seen the show to understand what he's referring to. But it's a fascinating take on the world of Breaking Bad. Sepinwall focuses particularly on Walt's pride and the poor decisions it prompts, his long-simmering resentment at having missed out on the prestige and wealth that Grey Matter generated, and his desire for control and respect. That notwithstanding, he doesn't neglect the other characters. Everyone gets attention. He also heaps well-deserved praise on the cast, particularly Bryan Cranston and Aaron Paul, as well as the writers and directors.

The pieces are brief, which makes it easy to get through the book quickly, plus once you get to the final season and start hurtling toward the explosive ending, it's impossible to put it down. Sepinwall actually wrote these as the show was airing, but many have been rewritten or updated for this book, which also includes contributions from Vince Gilligan, Cranston and others involved with the show.

Almost seven seconds pass between the time Walter White screams the words "WE'RE A FAMILY!!!" and the time he whispers them, and they are an eternity. They are everything. Those seven seconds are what Breaking Bad has been building to for the previous fifty-nine hours. They are the shattering of every illusion Walter White has ever had about himself. They are the terrified faces of his wife and son as they huddle together on the floor, trying to wish him into the cornfield. They are all his bogus self-rationalizations being dipped in acid until they are no longer recognizable. They are Walter White finally, after so much time and so much sin, coming to terms with everything he has lost.

Posted by Melinda at 8:59 AM
Labels: Books, Crime, Psychology, Television