Recent reading: "To Catch a Predator" 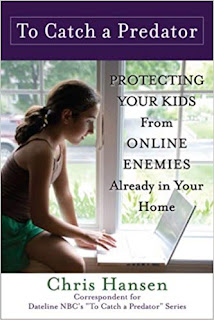 To Catch a Predator: Protecting Your Kids From Online Enemies Already in Your Home by Chris Hansen

This is both a riveting look at how easily children can be preyed upon online as well as a fascinating behind-the-scenes look at the creation of the To Catch a Predator TV program.

Interspersed with chapters detailing the show's episodes/sting operations are stories of online child predators, their tragic victims, law enforcement entities targeting predators via sting operations, and even a chapter devoted the blindsided wives of men convicted of pursuing underaged kids online. There are transcripts from Predator's stings that are shocking in how graphic they are despite the men believing they were talking to underage kids. Equally shocking - and terrifying - is learning how easily children can be groomed and manipulated online. And even as the show became a phenomenon, it was stunning how many of the men caught in the sting operations were showing up despite the fact that many of them were aware of - and in one case, a big fan of - To Catch a Predator.

I was also a big fan of the show and picked this up used recently. It was published in 2008 so some of the references are a bit dated (mainly MySpace being the big social media network at the time) but the warnings and advice are relevant today. This book contains a ton of helpful information and advice to help guard against online predators and is a must-read for anyone with kids.

The first day, August 25, 2006, was wild. Twelve men showed up. Once again we saw some "To Catch a Predator" firsts. Among the first through the door was a twenty-three-year-old who went by the screen name strega_num_7. He had been chatting online with a decoy posing as a thirteen-year-old girl. First he apologized for chatting up someone so young, but in less than twenty minutes he was asking questions like: "Would you ever suck dick?" He also asked: "Would you ever let me fuck you? How big are your tits?" and "Is your p___y shaved?" The last one is a question we have heard dozens of times and seems to be a common curiosity among predators.