This is how you deal with it when someone gets "offended"

Matt & Trey "apologized" by not caving in or apologizing:


Apparently China had previously banned Winnie the Pooh because people online decided that Chinese President Xi Jinping resembled the classic cartoon bear. Talk about not having a sense of humor. No way they were going to be happy with South Park making fun of that.

Here's a side-by-side comparison from the Guardian article linked above. You decide:


Also, you know what comes up when you start typing Xi's name into a search engine? You get this: 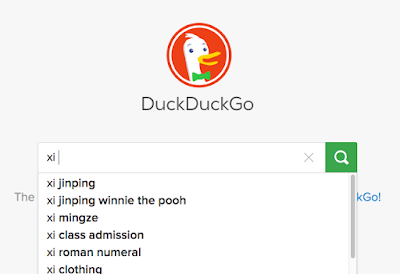 All the Chinese censorship did was bring a bunch of free publicity to South Park and brought more attention to the Xi/Pooh thing. I certainly hadn't heard about it before. Can you imagine having that oversensitive jackass in charge of your country? No wonder the Chinese people are rioting.

To be honest I'm more surprised South Park gets away with using Disney characters in its episodes than the idea an entire country would get their panties in a twist over a half hour of animation. This wasn't Mickey's first appearance on the show. If anyone should be taking action you would think it would be Disney. A boatload of their characters made appearances in this episode.

This is how you deal with offended idiots. You tell them to eff off. And the "May this autumn's sorghum harvest be bountiful!" line is totally going onto my social media accounts.

Posted by Melinda at 7:25 PM
Labels: In the News, LOL, Television