I don't even know where to start with this. Maybe I should try it as a timeline.

12/25/18: The Brother and I are working our way through our first Christmas without Mom. One of the topics of conversation that comes up is my 2019 writers conferences plan and I mention Bouchercon in Dallas in late October/early November. He decides he'd love to see Dallas so he registers for Bouchercon, books his hotel room, and I book our flight on American Airlines, which I've been using since I started going to conferences in 2012 and have previously been happy with.

To recap: December 2018, I book our flight for the following October. I have us flying out early morning Tuesday 10/29 and coming back Sunday morning. I figure this gives me about a day and a half to do a little site-seeing before the panels start on Thursday.

Now, let's jump to Monday, October 28, 2019.
8am: I get the email from American Airlines to check-in online, which I do. I print out our boarding passes.

Later that day, around 4pm, I put poor Sophie into the cat carrier and head to the vet's office. The neighbor that I'd hope could feed her while I was gone couldn't do it, so Sophie had to be boarded for the first time in her life. And since they're closed Sunday, I can't even pick her up when I get home. I have to wait until Monday, meaning another $32.

I get Sophie to the vet around 4:30 and get home around 5pm. That's when everything started going to shit.

It turned out that as I was turning Sophie over to her new babysitter, American Airlines sent me this:


So, ten months after I plan this trip, I'm suddenly arriving in the evening instead of early afternoon, I'm not getting there until dinnertime. I figure by the time we deplane, get our luggage, and get to the hotel (about 20 miles from the airport) it will be at least 7:30pm. So there goes the first afternoon and evening of our trip.

So many things pissed me off about this:

And I was right - we arrived at the hotel right about 7:30pm and we were exhausted. The Brother had a headache that carried over into Wednesday, so we didn't get much accomplished that day.

I haven't traveled in over a year, so I don't know if American's been going downhill or what. As I mentioned, I've been happy with them in the past, but this clusterfuck was a game changer. It couldn't have been handled worse. We booked this almost a year ago. They had all that time to make changes that we could have adjusted to. To do it at the last possible minute - literally 15-1/2 hours before we're supposed to be taking off - is just shitty customer service and not a good harbinger for future experiences.

Add to the fact that I just hate flying and there was enough turbulence to make this a really miserable flight, I'm really reconsidering future travel. I can drive to Left Coast Crime next March in San Diego, and next year's Bouchercon in Sacramento is just a short Southwest flight away. The Brother and I will definitely make a trip out of it when Bouchercon hits New Orleans in 2021. That one may have to go to Delta, maybe give them a chance to earn some customer loyalty.

Luckily, Thursday, this showed up in my inbox. That was the good news: 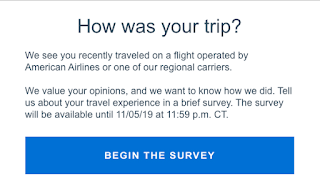 First of all, why send this when our trip wasn't even close to over? I wasn't about to give them a reason to fuck up our return trip. And putting a deadline on it? Dicks. And just to put the perfect capper on it, I got busy after returning home and didn't make the deadline. Needless to say I got pissed off and took to Twitter:

This was their anemic reply:

Posted by Melinda at 6:16 AM
Labels: Bouchercon, I Customer, Jerks, Rants, Writers' Conferences