"The Twilight Zone" on the big screen? Yes please.

The Brother and I got to see six episodes of The Twilight Zone at our local movie theater last night. Also included was an excellent documentary on Rod Serling. 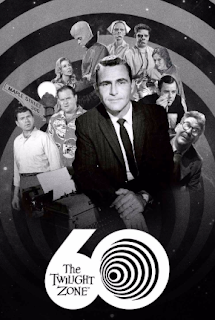 The description of the program from the Fathom Events website:

Walking Distance: Martin Sloane, a VP of an ad agency, stops his car at a gas station when he realizes he is 1.5 miles away from Homewood, the town he grew up in.He decides to walk there and finds that he has returned to the past. Season 1 episode 5 – aired 10.30.59

Time Enough at Last: Henry Bemis loves to read but he can find neither the time nor the place to enjoy his pastime. After sneaking down the vault in the bank's basement to read and emerges to find the world destroyed. He sees a great deal of reading time ahead of him. Except for one small unintended event. Season 1 episode 8 – aired 11.20.59

The Invaders: An old woman who lives alone in a ramshackle farmhouse comes face to face with alien invaders, however, the nature of the invaders is not immediately obvious. Season 2 episode 15 – aired 1.27.61

To Serve Man: Michael Chambers recounts recent events on Earth after the arrival of an alien space craft. Chambers attempts to decrypt a book the aliens left behind. The book's title seems benign - but it's not what they think. Season 3 episode 24 – aired 3.02.1962


Eye of the Beholder: Janet Tyler is in hospital having undergone treatment to make her look normal. Her bandages will soon come off, all that to say that truth is in the eye of the beholder. Season 2 episode 6 – aired 11.11.60

The Monsters Are Due on Maple Street: After an unexplained occurrence happens to the residents on Maple Street, a series of events causes paranoia and pandemonium to set in, and the neighbors on Maple Street to turn against each other. Season 1 episode 22 – aired 3.4.60

There were a couple of not-so-great issues. One was that the theater was apparently having problems downloading the program, which was supposed to begin at 7pm. At about 7:25 someone from the theater finally announced they were having technical issues but would begin in a couple of minutes. More than a couple of minutes later we were finally underway. To their credit, they did compensate us by handing out free passes as we left the screening.

The other issue is that I was kind of shocked how muted the audience was. I expected a lot more raucous enthusiasm from TZ fans. I was also annoyed by how many people were coming and going from the theater during the program. It was rude and distracting.

On the bright side, despite their age and being made for 1960's era TV screens, the episodes looked fantastic on the big screen. Props to whoever is responsible for that transfer.

The documentary Remembering Rod Serling started out looking like it was going to be nothing more than an ad for the 2019 CBS All Access reboot, as most of the talking heads early on were producers from that show, but once they got into interviews with Serling's daughter Jodi, family friends, and several of his former Ithaca College students, things really got interesting. There was footage I've never seen of Serling discussing writing in depth that was illuminating not only for the craft aspect, but also an incredibly revealing look at what drove Serling to write the things he wrote. I have a feeling I'm going to be spending most of today going down the internet rabbit hole checking out Serling interviews.