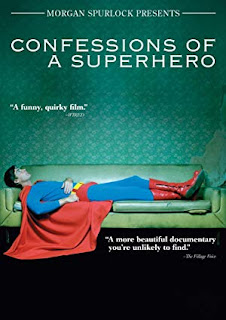 I reviewed Confessions of a Superhero on my old blog and one of the things I marveled over was that Christopher Dennis, who portrayed Superman on Hollywood Boulevard, showed off his Man of Steel memorabilia collection that he valued at close to $100,000 that packed his apparently security-free Hollywood apartment. In addition to Dennis's personal quirks - he claimed to be the son of Oscar and Tony Award-winning actress Sandy Dennis, whose family denied that she ever had a child - it made me wonder how long it would be before someone located the building (which the film showed repeatedly as an establishing shot) and rob him of his collection.

I don't know if that ever happened, but today comes the news that Dennis - described as homeless - has been found dead in the San Fernando Valley. He was 52 years old.

In the documentary Dennis took his Superman persona very seriously, both on and off the boulevard. The film also documented his marriage, although I haven't seen any mention of his wife in coverage of his death. This article from Variety says he was living out of a motor home at some point. I do wonder what happened to his Superman memorabilia. When I saw the movie, I figured that if the Hollywood Boulevard gig went south, he could sell off his collectibles and live off of that. Apparently I was wrong.

Posted by Melinda at 8:18 AM
Labels: Film, Hollywood