When in Dallas, be sure to visit the beautiful Hyatt Regency Hotel. And enjoy the view!

Now that I'm home I have a boatload of heavy-duty apartment cleaning to get to, so I'm going to start off with a brief Dallas trip post. More to follow including visits to a couple of really great museums.

I really liked our hotel, which is in the Downtown Dallas area. Turns out Dallas, like L.A., is really spread out. Their airport alone is like visiting a small city. Navigating LAX is a piece of cake compared to DFW. I wouldn't be surprised if it has its own zip code.

I haven't had a chance to really sort my pictures from the trip, but here are a few to give you an idea of how much I loved this place, especially the view from my room.

My first attempt at getting a pic of the view ended up with a nice reverse shot of the room: 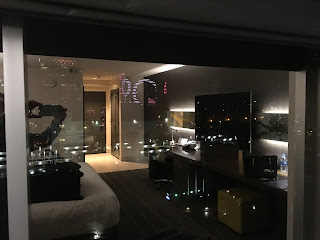 Tuesday and Wednesday were stormy. At one point the top of this building disappeared into the mist: 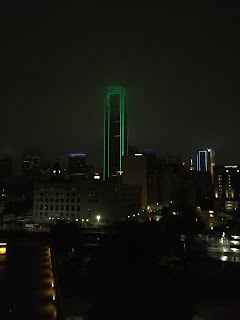 The building with the nightly light show turned out to be the Omni Hotel. Union Station is also right across the way. Local commuter rail, Amtrak and cargo trains all go through there:


The Brother actually went out sightseeing in this weather. After that it went up into the 60's with beautiful blue skies for the rest of our trip: 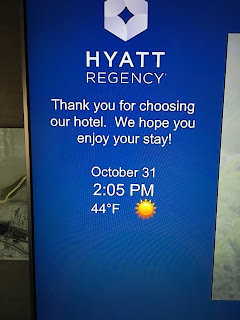 It was in the 80's when we landed at Burbank, which is just wrong for November. Give me Dallas weather!

Our Bouchercon/Dallas home away from home: The Hyatt Regency Hotel. That's Reunion Tower right next door: 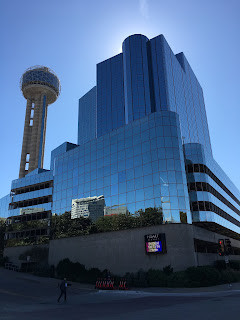 The Brother braved Reunion Tower's observation deck. Me and my rabid fear of heights did not. Also, how funny is the Hyatt's sign? "It's good not to be home." And it was.

The Hyatt is huge and the hallways can seem like a labyrinth. This piece of artwork kept us on the right track to and from our rooms. Thank you, big Texas ferris wheel picture! 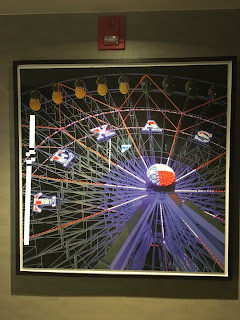 The hotel also has this cool giant column fountain in the lobby and they had a really neat way of welcoming Bouchercon (this was up for the duration of the conference):


Our final night there, the Omni had this lit up and I have no idea what FF means. Is it a Texas thing? 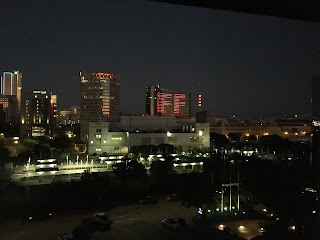 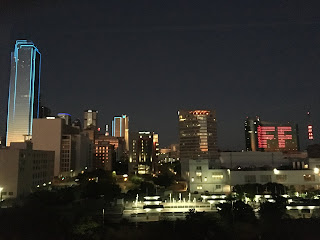 By early the next morning, the light show had returned: 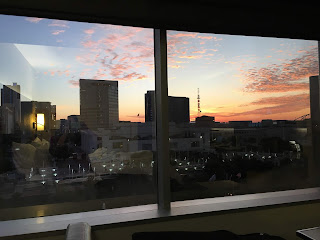 I know I've been babbling about Dallas non-stop the last few days, but we were just so impressed with the place and I couldn't stop staring out my windows. I wish we could have spent a few more days there. We're already talking about going back next year.

And oh yeah, guess what gas costs in Dallas? How about $2.40-ish per gallon. I paid almost $5 just days before the trip, and that was at the independent cheapie station. And Texas doesn't have state income tax. I couldn't help but think about how much farther my money would go there. Our driver on the way to the hotel told us he and his wife had just moved to the area three months earlier and love it. Keep pushing, Gavin Newsom. It's not like there aren't options.