Recent reading: "They All Fall Down" 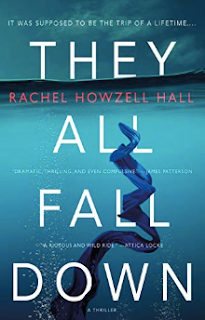 They All Fall Down by Rachel Howzell Hall

I'm already way behind my Goodreads 2020 Reading Challenge. I committed to 52 books (average one per week) and am halfway through two separate books - one a history of the Chateau Marmont and the other a short story anthology. So what did I do? I started a third book, which became the first one I finished.

Hall is the Guest of Honor at next month's Left Coast Crime, and (disclaimer) she also wrote the foreword for Crossing Borders. Since I'll be meeting her next month I thought it might be a good idea to check out her most recent book, the acclaimed They All Fall Down.

I can see why this book has received accolades. One of the blurbs on the back cover, from James Patterson, is a better explanation than anything I could come up with: "The twists start from page one and never let up."

Miriam Macy is heading to a remote island in the Sea of Cortez to participate in a reality show that she hopes will help both her bank account and personal problems. Miriam's life has spiraled out of control. Her relationship with her teenaged daughter Morgan, an aspiring ballerina, is fractured, she has lost her husband to Morgan's ballet teacher, and there's also something going on with another girl who was bullying Morgan, something bad enough that an LAPD detective is calling Miriam, wanting to talk.

They All Fall Down was inspired by Agatha Christie's And Then There Were None, so when Miriam and her "cast mates" arrive at the island, they learn that they were all lured there for different reasons, and then one by one they start dying off. What follows is a combination of Miriam trying to figure out who is committing the murders, how to get off the isolated island alive, and the slow reveal of exactly what happened between Miriam and her daughter's bully.

I rocketed through this book in just a couple of days. It roped me in from page 1 and I felt compelled to keep reading. It's just a terrific story and highly recommended.

Ten minutes.
It had taken ten minutes for the Valium to work.
And now I felt nothing.
Smoothed out. Empty. Void of emotion.
And that hollowness lived solidly next to my heart and my lungs, that hollowness as useful as my appendix.
I took a deep breath, then found my phone in my purse. I took another breath, then reread my daughter Morgan's text message, the same message that had sent my flying into a toilet stall.
It was a short message.
Just three words.
I hate you.