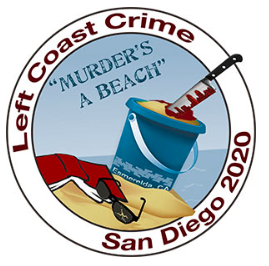 Early last Wednesday morning, prior to heading to San Diego for this year's Left Coast Crime Writer's Conference, I blogged a rather defiant piece in defense of the conference's decision to soldier on despite the COVID-19 virus, while a slew of last minute author and attendee cancellations and shutdowns were just beginning, including sporting events and the Los Angeles Times Festival of Books.

I did write that I respected that anyone who didn't feel safe traveling to the event (especially those who fall into the high-risk categories - elderly, existing health issues, immunity issues) were absolutely entitled to bow out, especially if they had to fly. I was fortunate that this was one conference I could drive to and I didn't have to worry about being packed into an airport and plane like one of many sardines. But other than that I wasn't about to let a little hysteria ruin a conference that was going to include the launch party for Crossing Borders and my chance to sit on the other side of the table as an author.

About an hour later I deleted the post. It had zero views, for which I'm grateful. Because during the next 24 hours, the shutdown of, well, pretty much everything commenced. Rather than being precautionary or panicky, the shutdowns announced earlier in the week turned out to be just the first of many dominos to fall and in retrospect, while my feelings expressed in the post were well-intentioned, that post could have come across as obnoxious and irresponsible. God knows it wasn't the first time I've used the blog as an outlet to vent, and it is my blog so I've always felt justified using it to express my opinions. But I also put it out here in the public and ultimately I just didn't feel like that post served any good purpose.

Less than a week later, schools, restaurants, movie theaters, gyms, the L.A. Times Festival of Books, Broadway shows and countless upcoming events have been cancelled or postponed. Also cancelled: Left Coast Crime before we could even get through the first complete day. San Diego County issued a statement late Thursday afternoon shutting down large gatherings and that included us.


The Crossing Borders launch party was scheduled for 7:30pm on Thursday, so that became one of the many casualties. The attendees took the news well - not surprising as it's the kind of community that you can count on to take the high road - but my heart just went out to the organizers. For the local crew this represented over two years of work and planning and it was shaping up to be a great conference. I just feel so bad for them. Their biggest problem should have been the rain. Instead, they had to watch all their hard work be brought to a screeching halt.


To me the worst part of what happened to LCC 2020 is that I think that when all is said and done, we're going to look back on at least a large portion of the panic and shutdowns as an intentional media and politically fueled frenzy. That's my theory (or conspiracy theory, if you wish - we're all entitled to our respectfully expressed opinions here on the old blog) and until I'm proven wrong, I'm sticking with it. I do understand that all the shutdowns and cancellations (and social-distancing, my new least favorite phrase) represent erring on the side of caution, because what if you don't and this does turn out to be the next black plague? But I've heard enough sources describing it as no better or worse than any other flu epidemic we've been through before and right now that's what makes sense to me, so that's how I'm proceeding. If it turns out I'm wrong I'll be the first to admit it. And also probably die from it, because, irony.

The small portion of LCC that I was able to enjoy was great and I'm glad I made the trek to San Diego. I got to meet Kim Keeline, one of the local organizers who was also our contact during the submission and publication of Crossing Borders, as well as LCC Guest of Honor Rachel Howzell Hall, author of They All Fall Down and who also wrote the forward for Crossing Borders. Unfortunately, I didn't get the chance to meet Lisa Brackmann, my editor on the anthology, but I'm hoping to at a future event.

If you're a fan of the genre and you haven't experienced Left Coast Crime, your next chance is April 2021 in Albuquerque. Hopefully sanity will have been restored by then and we'll get to enjoy what will no doubt be a great conference.

Gorgeous San Diego sunsets from my room, nights one and two: 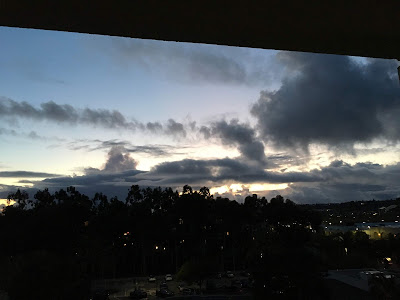